Mayor Wheeler is working closely with his partners at Multnomah County and the State of Oregon to respond to the rapidly evolving COVID-19 situation.

Please visit our COVID-19 information page for the latest information about how to keep our community safe and fight the spread of this virus. 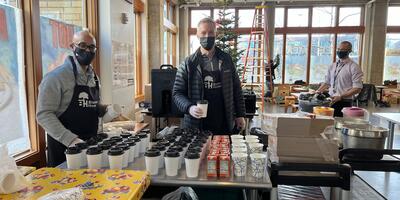 Mayor Ted Wheeler (he/him/his) was born and raised in Portland and comes from a family with deep roots in Oregon. As a sixth generation Oregonian, he is proud to call Portland home and is driven by his values of strengthening communities through inclusive, effective, and responsive government. He does this by leading on:

Mayor Wheeler’s first term was a time of extraordinary growth for Portland. He convened community and Council partners and lead the city through significant change with policies rooted in the city’s values of equity, diversity, and inclusion.

As the former State Treasurer of Oregon, Mayor Wheeler understands the economics of effective government.

Shortly after taking office, he reshaped the City’s budget process to make it more efficient, effective, transparent, and representative – for community members and for City Council.

When he saw the inequity in opportunities for communities of color, he launched Portland Means Progress with Prosper Portland, the city’s economic development agency, so that youth of color have access to the City’s best businesses through highly coveted internships.

With the homeless crisis ever growing in the West Coast, he prioritized addressing the problem and brought record investment to homeless services, partnering with Multnomah County to invest in our community’s nationally respected Joint Office of Homeless Services.

Now with a city continuing to attract tourists from all over the world and new residents moving in, livability is one of the Mayor’s top priorities. He convened city bureaus, business partners, and non-profits to work together on trash clean-up all over the city. As a result, since taking office, more than 10 million lbs of trash have been picked up and continue to get cleaned off the streets.

He brings people, communities, and businesses together to get things done.

Mayor Wheeler has been in public service for more than a decade. He was first elected Chair of Multnomah County in 2006 and took office in 2007, where he balanced the county budget during the worst years of the recession and reduced debt while maintaining safety net programs for vulnerable populations. He prioritized funding mental health and drug addiction services as well as creating economic opportunities for marginalized communities. Under his leadership, Multnomah County became the first public entity in Oregon to “ban the box” on employment applications.

Mayor Wheeler was then appointed to the office of Oregon State Treasurer by Governor Ted Kulongoski in 2010 and elected to the position in 2012. Under his leadership, Oregon’s investment portfolio outperformed every one of its nationwide peers, creating new resources for the state and helping state and local governments meet their commitments. These gains were made while establishing new financial stewardship guidelines and establishing Oregon as a leader among public fund managers in corporate governance. By advocating for effective and responsible use of the State’s debt capacity, he led the state to an improved credit rating. He re-launched the Oregon College Savings Plan so that students and families could save and earn more for college, and championed the creation of the Oregon Investment Act, helping the state invest more effectively in the growth of small business. Working with legislators, AARP, and labor partners, Mayor Wheeler launched the Oregon Retirement Savings Plan (OregonSaves), the first state-sponsored retirement plan for private sector employees and individuals in the country. Today, OregonSaves is a national model for state-sponsored retirement security.

Outside of public service, the Mayor’s love of the Pacific Northwest and our wilderness areas runs deep. He grew up hiking, camping and climbing local peaks, and volunteered for almost a decade with Portland Mountain Rescue.

An avid runner and swimmer, Mayor Wheeler regularly competes in triathlons and marathons, including the Portland Marathon, which he helped relaunch. He also completed the Ironman Triathlon seven times, most recently in Tempe, Arizona.

He is a father, a proud Lincoln High School Cardinal, and privileged to serve as the Mayor of the great City of Portland.