Skip to main content
Have you interacted with our customer service recently?

We want to hear from you! Whether you called us, emailed us, or paid your bill online, we want to hear about your experience on our Customer Service Survey. 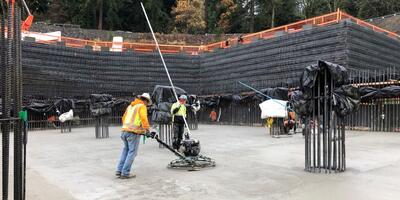 Cementing our commitment as a lower-emissions consumer.
Published
June 16, 2022 9:53 am

“Most of us don’t think much about the concrete beneath our feet. As the most widely used building material in the world, it has a significant environmental impact,” said Stacey Foreman, who leads the project as the City’s Sustainable Procurement Program Manager. “Portland is a leader in establishing these thresholds and in our approach of bringing multiple stakeholders together to develop them.”

The largest component of concrete is cement. Cement production alone generates eight percent of global greenhouse gas emissions. The lower-carbon mixes can be designed to perform as well as, or better, than conventional concrete, and are competitive in cost.

When considering all City projects that use concrete, the annual reduction is significant. The City uses concrete for a high volume of projects, including sidewalks and ADA ramps, bicycle and pedestrian paths, fire hydrant pads, retaining walls for parks, and large infrastructure projects such as the Water Bureau’s Bull Run filtration facility and the Bureau of Environmental Services’ wastewater and stormwater infrastructure. By adopting higher sustainability standards for concrete, bureaus will accelerate their use of concrete that is durable and that has been manufactured with lower climate impacts. This change is a win for City bureaus, the environment and everyone who calls Portland home.

The new City standards take effect in January, but projects are already underway that use low-carbon concrete:

The new requirements will accelerate the City’s use of low-carbon concrete, and create a framework for a consistent, trackable and enforceable low-carbon standard.

The City of Portland developed the new requirements with a multidisciplinary stakeholder group that offered recommendations on reducing the carbon footprint of concrete used on City projects. Implementing these threshold requirements will result in a range of 3 to 35-percent reduction in greenhouse gas (GHG) emissions over historically used concrete mixes. For example, for a large project like a new water reservoir, a 19-percent reduction in concrete-embodied carbon represents a savings of approximately 3.5 million kg-CO2e (carbon-dioxide equivalent). This would be the equivalent of removing 754 gasoline-powered cars off the road or the amount of carbon sequestered by 4,142 acres of U.S. forests (approximately three times the size of Forest Park) for one year.

Responding to the climate emergency

In June of 2020, City Council declared a Climate Emergency which, in part, recognized that carbon emissions resulting from the consumption of food, goods, materials, and services by Portlanders (known as consumption-based emissions) are more than double the emissions produced locally (known as sector-based emissions). Based on a review of consumption-based emissions from City operations, the City began taking action to reduce them, starting with high embodied-carbon building materials such as concrete. Addressing embodied carbon in City operations also aligns with the Bureau of Planning and Sustainability’s work on communitywide sustainable production and consumption, which includes actions focused on lowering carbon in construction (see p. 36 of the workplan). portland.gov/sites/default/files/2020-06/sustainable-supply-chain-analysis-2016-executive-summary-final.pdf

“This has been a unique and thoughtful process that has taken stakeholder recommendations into account through the implementation at every stage,” said Michael Bernert, Vice President, at Wilsonville Concrete Products, a member of the stakeholder committee. “This process involved engineers, contractors and suppliers, which is not always the case.”

These low-emission thresholds have the potential to make a positive impact in the local market.

“The Water Bureau’s filtration project has been evaluating ways to maximize the use of low-carbon concrete in an industry where standards are sometimes slow to change,” said Jodie Inman, the Portland Water Bureau’s Chief Engineer. “These thresholds demonstrate that the City of Portland is a large customer that cares about concrete performance and reducing our carbon footprint. This creates an incentive for suppliers and contractors to provide materials that meet our new, stricter standards,”