Please note that system maintenance is scheduled on Sunday, September 19th between 9:30 a.m. and 2:00 p.m. During this time frame, customers may be unable to view bills, make payments, or view account information. We apologize for the inconvenience.

Can You Imagine Downtown Without Water?

Blog Post
The Willamette River Crossing Project will strengthen Portland’s water system and keep water flowing to the west side – even after an earthquake.
Published
August 19, 2020 1:50 pm

The Willamette River Crossing Project will strengthen Portland’s water system and keep water flowing to the west side – even after an earthquake.

If a major earthquake struck Portland today, the city core wouldn’t have reliable water for six months or more. That’s because the water mains (pipes) crossing the Willamette River are more than 50 years old and they are in liquefiable soil – soil that has a lot of water and will shift and move like liquid during an earthquake. Those pipes probably wouldn’t survive a big quake. That means no water to drink and flush toilets, no water flowing to fight fires and no water to help people in critical facilities like hospitals. It also means billions of dollars of economic damage to the whole state of Oregon.

Liquefaction happens when vibration in soil, like when an earthquake makes the ground shake, causes the soil particles to lose contact with one another. As a result, the soil behaves like a liquid. Watch a video to learn about liquefaction here.

The River Crossing Project is part of our commitment to preparedness. Installing an earthquake-resilient water pipe deep under the Willamette River will help deliver water to the west side and downtown after an earthquake. This water pipe is the next step in strengthening our system and keeping water flowing.

We’ll combine horizontal directional drilling and microtunneling to bury pipe deep in bedrock under the Willamette River. Crews won’t work in the river which will reduce impacts to shipping, recreation, and fish habitat. Crews will also store 1,600 feet of pipe in a tunnel deep underneath the busy commercial zone on the east side before feeding it under the river. This means less impact on businesses, traffic  and the public.

We need to know exactly what’s underground before we go “full bore”—so first we’re collecting data from a geotechnical probe, or Geoprobe. This will allow us to map the types of soil and rock along the proposed crossing route.

A Geoprobe machine looks like a tractor with a large ladder. What looks like a ladder is actually a rig that probes soil. Instead of drilling, the Geoprobe hydraulically pushes tools and sensors up to 200 feet below the surface.

The Geoprobe will provide samples along the drill path for geotechnical engineers to analyze. It can also record data from underground tests:

The samples and test data will help us map what’s underground, to chart the best way so that we can proceed beneath the river. 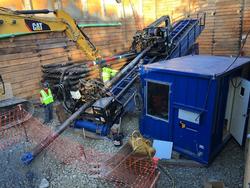 What to Expect: Traffic and Noise