Please note that system maintenance is scheduled on the morning of Sunday April 18th, between 2:00 a.m. and 5:00 a.m. During this time frame, customers may be unable to access our view/pay bill website or our 24-hour automated payment line. We apologize for the inconvenience.

Counting Fish on a Moonless Night

Quite a bit of monitoring, habitat protection, and restoration work happen within the watershed. Using sophisticated sonar technology, processing software, and a boat, Strobel collected data used to track the size and number of fish that make Bull Run Lake their home. These surveys are done at night and under low moonlight, when fish are more likely to rise up off the bottom of the lake and be more visible to the sonar in the dark. 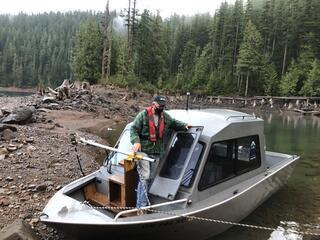 Strobel takes this odyssey annually to monitor and report any changes in the cutthroat trout living in the lake. Protecting these fish is central to the Portland Water Bureau agreement with the U.S. Forest Service, which allows us to use the lake as a water source.

There are two transducers, one that points straight down and another that points sideways. The side-looker detects fish in shallow water that would be too close for the down-looker to locate. The time it takes for an echo to come back indicates how far away a fish is. That combined with how loud the echo is tells us the size of the fish. Transducers detect fish at approximately 60 meters down. They can’t “see” the deepest part of Bull Run Lake, so potentially, a sea monster could remain unassailed. After telling a few tall tales about what could lie beneath the lake’s surface, Strobel got to work. 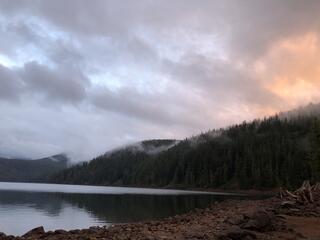 Strobel and a boat operator from Sandy River Station began the expedition by jaunting across the lake to place magnetic flashing lights at predetermined places around the lake’s perimeter. Later, the boat navigated toward those lights, dropping pings and measuring echoes along the transects, of which there are seven total. While the transects are uniform year after year for consistency, hydroacoustic surveying is an evolving art, and many improvements have been made over the years.

The boat is mounted with sonar equipment, and the boat travels multiple transects of the lake while sonar return data are collected.  It's a delicate and valuable job that the transducers do, but one that takes a little bit of explaining to fully understand.

After a short dinner break on the land, the boat sets off again. This time, the transducers are dropping pings and listening for echoes. Fish are stirring confidently in the darkness of a foggy autumn night. As pings are returned with echoes, data begin populating the screen.

All the while, bats are rising in silhouette above forested mountain peaks. Strobel treasures these solitary nights in the watershed.

On the next moonless night, reflect on this: Burke Strobel and the Water Bureau team are monitoring, listening, counting and protecting our most precious natural resources.