Please note that system maintenance is scheduled on the morning of Saturday May 15th, between 5:30 a.m. and 5:00 p.m. During this time frame, customers may be unable to access our view/pay bill website or our 24-hour automated payment line. We apologize for the inconvenience.

Wildfire: Not All Forests Are Created The Same

October 2020.  The smoke has cleared, evacuation orders have lifted across the state, and Oregonians devastated by the recent fires are beginning the long, hard road of recovery. In Portland, we are breathing a sigh of relief that the City’s primary drinking water source, the Bull Run Watershed, was not affected by the recent Labor Day wildfires.

WESTSIDE FIRE – UNCOMMON BUT NOT UNPRECEDENTED

Forests that flank the western slope of the Cascades, like the Bull Run, burn very infrequently, once every few centuries. These temperate rainforests are typically blanketed by damp westerly winds off the ocean and lots of rain as the storm clouds lift over the Cascades. The forests retain huge amounts of that moisture in trees, undergrowth, logs, and thick “duff” layers on the forest floor. It’s for these reasons that a major fire has not burned in the Bull Run since the 1800s, prior to construction of the City’s water system. This is in stark contrast to drier forests in Oregon and California where fires are more common.

Fires burning across westside forests were in large part what made Oregon’s 2020 fire season unusual. But westside forests do burn, and they burn during extreme east wind events accompanied by unusually hot air temperatures and sharp drops in relative humidity - exactly the type of event that took place starting on Labor Day 2020. These severe conditions quickly turn wet forests from fire resistant to fire receptive. The Labor Day 2020 event was likely the strongest summertime (July to September) east wind event of the past century. It is similar, though, to east wind events that drove the infamous westside Tillamook Burns of the 1930’s to 50s, the 1902 Yacolt Burn, and the 2017 Eagle Creek fire that burned close to the Bull Run.

But wind alone does not start a fire; it needs an ignition source. Summer season lightning is rare in westside forests, making it unlikely to coincide with an east wind event. What is common on the westside, though, are people. Human ignition sources, from powerlines to cigarettes to campfires, are now everywhere on the landscape. Nearly all large westside fires, including the Tillamook and Yacolt Burns, and the Eagle Creek fire, were started by human ignitions. Powerlines and other human ignitions started many of the large fires that burned throughout western Oregon in 2020.

The other human fingerprint on the 2020 fires is climate change. A warmer climate is “loading the dice” for a major fire to occur by increasing the dryness of vegetation and lengthening the fire season. In the Bull Run, maximum and minimum air temperatures have increased by 2°F to 3°F on average since the 1900s. Higher air temperatures, earlier and longer summer dry seasons, and dry vegetation set the stage for extreme fire. These factors increase the probability that when an extreme east wind event occurs, it will meet forests that are ready to burn.

In drier forests of eastern and southwestern Oregon and much of California, pre-20th century fires burned frequently and naturally thinned the trees and undergrowth. While fire suppression over the past century has left these dry forests denser and “out of whack” with their historic condition, tree thinning and prescribed burns are now common tools to reduce fuels and fire risk in dry forests. Conversely, wet old-growth forests on the west side of the Cascades, like the Bull Run, are generally not that much different than how they’ve existed for hundreds of years. Because these forests naturally grow thick with vegetation over centuries, thinning and prescribed burns don’t work in them - the fuels grow back too quickly. Recently, the Oregonian newspaper has published some great articles that delve into the unique character of the 2020 fires  as well as the scientific thinking on this topic.

So, what does all this mean for the Bull Run, a very wet, westside forest? It means that a large fire will occur in the future. Like a Cascadia earthquake, we don’t know when it will happen, but we know it will happen eventually.

In coordination with the U.S. Forest Service, the Water Bureau manages a comprehensive wildfire protection program for the Bull Run watershed that includes fire prevention, detection, and suppression strategies. Perhaps the most important tactic is restricting public access in the Bull Run, and thus reducing human-caused fire ignitions. Only a limited number of authorized Water Bureau and federal agency staff regularly access the watershed for official business purposes. The map below of fire starts in and around the Bull Run between 1992 to 2015 highlights how important this tactic of restricted access is in reducing human-caused fire ignitions inside the watershed. 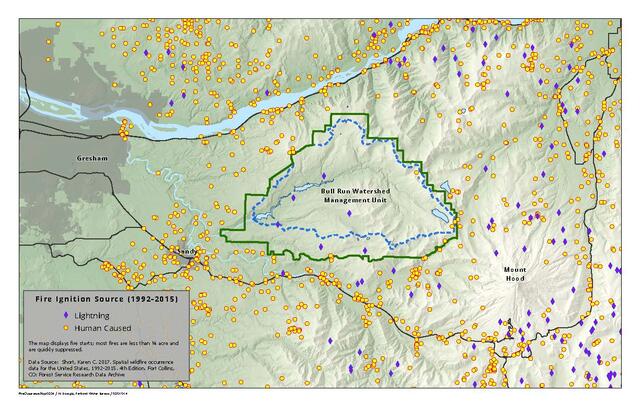 Other than a fire starting inside the watershed, the greatest risk is a major fire to the east of Bull Run burning into the watershed during an east wind event. During the 2020 event, the Mount Hood National Forest, which borders the Bull Run to the east and southeast, closed all recreational access to the Forest. In addition, Portland General Electric shut down powerlines through the Mt Hood / Highway 26 corridor. These proactive steps helped further reduce the potential for a fire start from powerlines or other human ignitions near the Bull Run.

Even with these preventative measures and a dose of luck, the Water Bureau knows that a large fire someday can and will happen in Bull Run in spite of our best efforts. To prepare, the Water Bureau is actively engaged in post-fire planning and resiliency. A future blog will discuss some of this post-fire planning work. The strongest resiliency tool that we currently have is our Columbia South Shore Well Field groundwater system. Groundwater, along with the filtration plant scheduled to come online in 2027, provides resiliency and flexibility to help ensure high-quality drinking water is available after a large fire or any natural disaster.