In August, we finished work with our geotechnical probe, or geoprobe. The team is now using results from that probe to plan the next phase of the project. The geoprobe showed that we need more information to choose the best tunneling technology and route across the Willamette River. We will likely have to change the planned depth or drilling technologies to move the project forward.

Our contractor will use all of this information to design and construct the pipeline. To collect the new information, our design/build contractor drilled and sampled in the Willamette River and nearby on the east and west sides of the river during January to March of 2021. The team is currently analyzing that information to determine next steps.

If you know people who live in, work in, or travel through the area, please inform them about this project:

You may see workers in and near the parking lot at 1720 SW Naito Parkway. We’re temporarily sharing this site with the Bureau of Transportation while they work on the SW Naito Parkway Improvement Project, I-405 to Jefferson. In addition to street work, our crews are installing connections between the existing water system and new pipe. 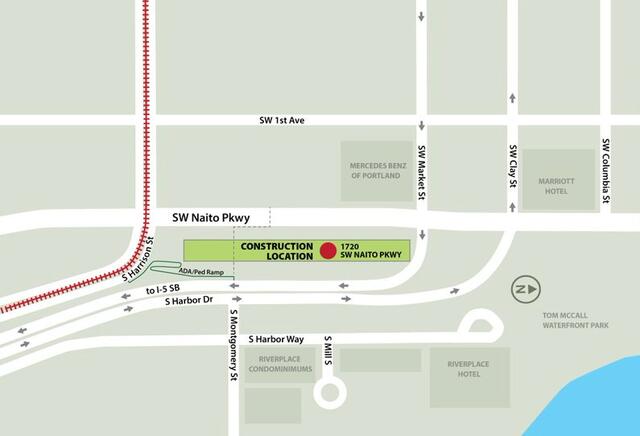 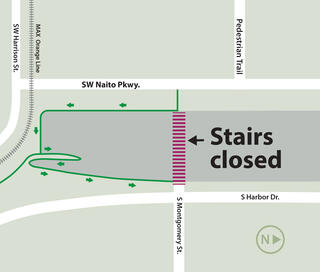 The parking lot and stairway at Southwest Naito Parkway between Southwest Harrison Street and Southwest Market Street are closed to the public for the duration of the project. Use the ADA-accessible ramp on the south end of the parking lot as a detour.

Crews collected samples in the parking lot near OMSI, near SE Water Avenue, and at four points along SE Stephens Street.

Starting in the winter of 2021/2022, we’ll work along Southeast 7th Avenue and along Southeast Harrison Street between Southeast 7th and 11th Avenues to connect the new underground pipe to the existing water system. As this will affect traffic, parking, and driveway access in the area, we’re working with local businesses and residents now to plan for their access needs.

In January and February, we sampled the soil under the Willamette River near the Marquam Bridge.

Project Voicemail/Hotline - Press zero at any time to skip the message and leave a voicemail. Please leave your name and phone number twice. A staff person will call you within one to three business days. To report a water service emergency, call 503-823-4874.