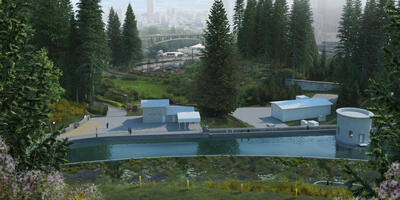 The Portland Water Bureau is replacing two reservoirs that have served the city since 1894 with a new 12.4-million gallon, seismically reinforced underground reservoir, a bioswale (stormwater facility), lowland wildlife habitat area, and reflection pool.
On this page

When you subscribe, select the checkbox next to "Washington Park Reservoir Improvement Project."

The Portland Water Bureau is replacing two reservoirs that have served the city since 1894 with a new 12.4-million gallon, seismically reinforced underground reservoir.

On June 29, 2021, the Water Bureau achieved a major milestone – activating the reservoir at Washington Park. The reservoir is now supplying water to Portland's west side and serving more than 360,000 people, including all downtown businesses and residents, 20 schools, five hospital complexes, and more than 60 parks.

The new fully-enclosed reservoir was built within the footprint of the previous upper reservoir, Reservoir 3. The new reservoir is designed to withstand future seismic activity, as well as movement from an ancient landslide on site.

During a future phase of the project, a reflecting pool that is not connected to the water system will be built on top of the reservoir tank to mimic the shape, look, and feel of the historic uncovered reservoir.

In the lower area where Reservoir 4 used to sit, the site is being developed into a reservoir overflow basin, a bioswale (stormwater facility), lowland wildlife habitat area, and reflection pool.

View an artist's rendering of an aerial view of the completed project:

The project is part of the Water Bureau's Capital Improvement Program and is funded by revenue bond proceeds paid back with the utility ratepayers' fund.

Look at what's happening today via our live project webcam.

View how the project has changed over time via our virtual tour.

Washington Park's previously open Reservoirs 3 (upper) and 4 (lower) occupied the site, along with two gate houses, a weir building, three pump houses, a generator house, and associated underground piping. The reservoirs were part of an ingenious gravity‐fed drinking water system constructed more than 120 years ago in the 1890's. The system was active for more than a hundred years before the current construction project began.

Construction began in June 2016 and will continue through 2025. A pause in major construction is scheduled to begin in 2021 to allow the soil that was replaced around the reservoir to settle. During this time, we will continue work on some smaller projects on the site, such as upgrading the hypochlorite building near the base of Reservoir 4. We currently expect the soil to have settled approximately nine inches by 2023. Once we determine that the soil has settled into place, we will begin construction of the elements that sit on top of it: the reflecting pool, interpretive features, railings, benches, and landscaping. The project is expected to conclude in fiscal year 2025.

The reservoir structure was completed. Crews began the process of connecting the reservoir to the rest of the water system.

The reservoir was tested, sanitized, and filled and began serving water on June 29, 2021.

Soil will be placed over the reservoir and around the site in preparation for future construction of reflecting pools, walkways, and landscaping.

We know that the soil around the reservoir will take up to two years to fully settle in place. The final phase of the project will involve pouring concrete for walkways, interpretive elements and the reflecting pool in the area around the reservoir. And, concrete will crack if we put it on top of soil that is still settling. So, we will set up a monitoring system to measure soil settlement and pause work until soil has settled.

Work that's not dependent on the soil settlement may continue, such as restoring historic building features and upgrading the Hypochlorite Building.

The timing of this phase depends on how much and how quickly the soil settles. Watch for another schedule update as we near the final construction phase.

Building with Earthquakes in Mind

The Portland Water Bureau has worked for the past several decades to increase the number of our water supply facilities that can withstand earthquakes. Even though the new reservoir will keep the historic look and feel of the original reservoir, it is being engineered with modern technology and building standards to withstand seismic activity.

The Washington Park site is on an ancient landslide that extends from the Rose Garden down the hill to the area where the reservoir sits. The Water Bureau has used innovative construction methods to address landslide and earthquake risks including:

In 1894, heavy equipment like tower cranes, backhoes, and forklifts were practically nonexistent. Materials were delivered by wagon and pulled by horses or mules. Workers moved supplies and materials around the site using wheelbarrows and brute strength. 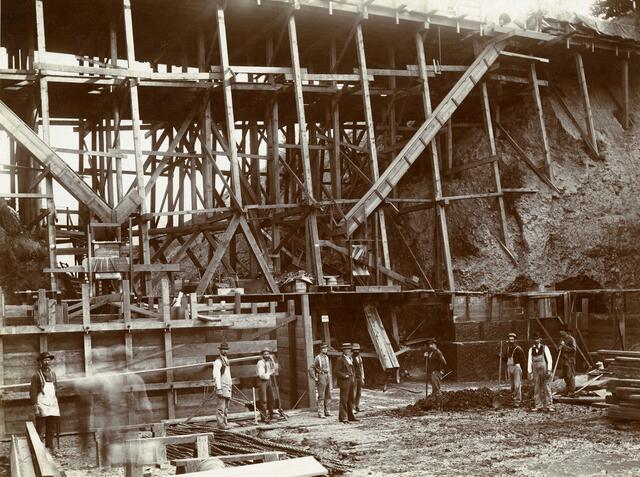 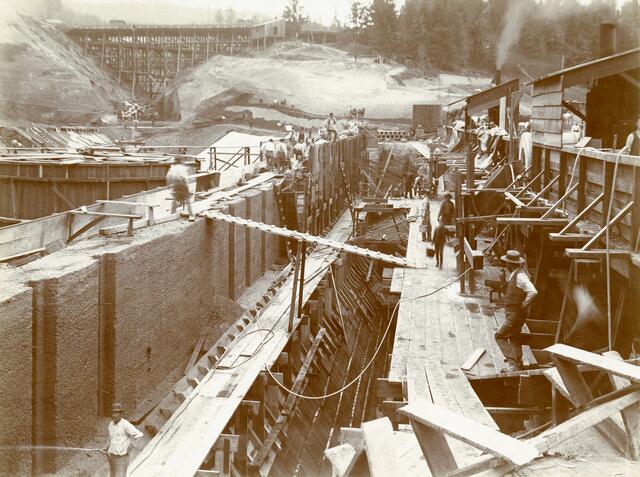 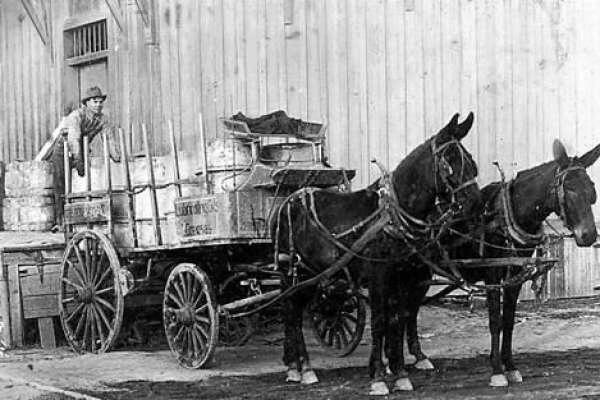