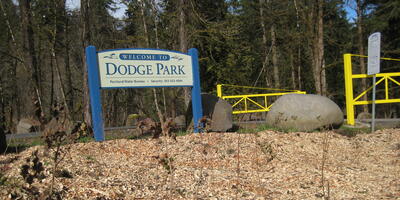 Located at the confluence of the Sandy and Bull Run rivers, Dodge Park is a playground in Portland’s backyard. Just 20 miles east of Portland, the park offers year-round picnicking, fishing, and boating.
On this page

Dodge Park is now open Mon-Thur. from dawn to 4:00 p.m. While enjoying Dodge Park, please follow all physical distancing guidelines, wash or sanitize your hands when possible, and be aware of others' needs.

Located at the confluence of the Sandy and Bull Run rivers, Dodge Park is a playground in Portland’s backyard. Just 20 miles east of Portland, the park offers year-round picnicking, fishing, and boating.

Dodge Park is open for day use year-round. See Park Policies below for park hours. There is no entrance or parking fees. The park offers a unique site for fishing and picnicking. Picnic sites boast tables and grills. There is a children's playground and portable sanitary facilities available year-round.

Camping and community hall rentals are no longer available at Dodge Park.

Dodge Park is one of many launch sites for the 38 river miles that make up the Sandy River Water Trail. Boaters are allowed to leave a shuttle vehicle overnight at Dodge Park under the following conditions:

Boaters must call Portland Water Bureau Security at 503-823-6084 and provide the following information:

Out of respect for other visitors and neighbors, please observe the following rules:

For locations closer to Gresham: 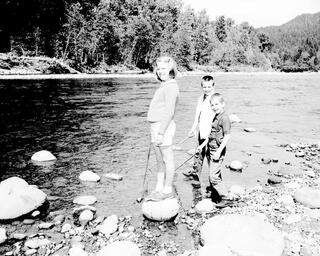 For nearly 100 years, people have flocked to this scenic spot at the confluence of the Sandy and Bull Run rivers. Originally named for the town of Bull Run, Dodge Park was renamed for Frank Dodge, the second Superintendent of the Portland Water Bureau who served from 1897 to 1914. Frank Dodge was one of the earliest photographers who recorded river flows in the Bull Run River and the Bull Run Watershed.

In 1911, the Mount Hood Railway and Power Company built a railway line from Montavilla in east Portland to the town of Bull Run. The railway line was first built to move materials to the powerhouse being built for the Bull Run Hydroelectric Project on the Sandy River. The steam locomotive line served 30 small communities on the way to Dodge Park.

In 1912, the Portland Railway, Light and Power Company acquired the rail line and converted it to an electric trolley line.

The annual report for the Portland Water Bureau for 1926 notes that "a conservative estimate of visitors during the last summer would be thirty thousand....At times there was hardly room enough to accommodate the crowds that poured into the Park on Sundays." No less than 168 picnic tables and 72 brick campfire grills, as well as many stacks of firewood, served the weekend crowds.

Trolley service ended in 1930, but roadways and a bridge installed in the 1920s continued to give people access the park.

In the 1940s, the City of Portland established a "Boys and Girls Camp" at Dodge Park in addition to the picnic grounds. The Water Bureau and Portland Parks & Recreation comanaged the park until the late 1980s.