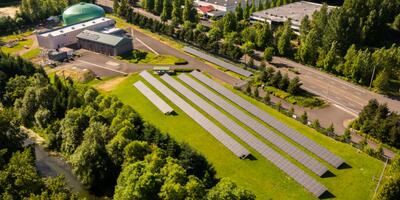 Each year, we develop a Seasonal Water Supply Augmentation and Contingency Plan. This plan makes sure we're prepared for the range of potential drinking water supply and demand conditions that could occur in the Portland area.
On this page

Each year, we develop a Seasonal Water Supply Augmentation and Contingency Plan for Portland's water system. This plan evaluates the availability of water from the Bull Run Watershed and groundwater source, projected weather forecasts, and water demands to guide management of the drinking water system. Fortunately, unlike many other Western water supplies, Portland's primarily rain-fed Bull Run water supply does not depend on snow. Between careful management and the region's strong conservation efforts, we are prepared to meet the range of potential supply and demand conditions that could occur in the Portland water system this season.

The 2022 summer supply season saw a wet spring that resulted in an average start to reservoir drawdown. This was followed by an extended warm and dry summer that resulted in the Portland Water Bureau supplementing the Bull Run drinking water supply with groundwater from the Columbia South Shore Well Field from October 13 through November 3 at an approximate blend of 50- 60% groundwater to Bull Run. Precipitation in late October and early November began refilling the reservoirs, ending the summer supply season.

The graph below shows the usable storage in the Bull Run reservoirs for 2022 (red) compared to the average level (green) and levels from 2015 (yellow), a recent supply-stressing summer, and 2021 (black). 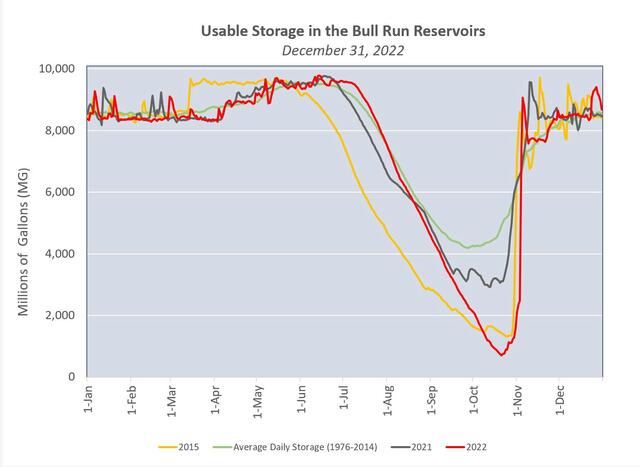 Is there enough water to get through the summer?

We carefully plan each year to make sure everyone has the water they need throughout the Portland area's dry summers. To make sure there's enough water for a particularly hot, dry summer, we can supplement our usual Bull Run supply with groundwater from the Columbia South Shore Well Field. For most years, we anticipate that these two sources will provide us plenty of water to get through the summer.

How does the Portland Water Bureau prepare for the summer?

We carefully monitor reservoir levels, weather forecasts, and water use patterns to make sure there's enough water. Every year, we carefully watch the water supply and make a plan for a range of possible supply conditions.

Will the Water Bureau use groundwater in summer?

Each year, we perform an annual groundwater maintenance run to ensure its reliability. However, we make decisions to use groundwater to supplement supply based on many decades of historic supply conditions, current demand conditions, and short- and long-term weather forecasts. Portland has used groundwater multiple times since the 1980s to help meet summer demand and to serve as a backup source for Bull Run.

As with most years, we don't anticipate any water supply shortages. We will communicate directly with customers and water users if conditions change.

Water supply conditions fluctuate from year to year. Each fall, the Bull Run reservoirs fill to capacity, and remain full until late spring or early summer. Drawdown—the term for the period each year during which the amount of water stored in the Bull Run reservoirs decreases—typically starts in early July and continues until the return of autumn rains.

Does Portland have enough water for its growing population?

Yes. As Portland's population has grown, the city's total water use has actually decreased. From 2007 to 2017, Portland's population grew by 11 percent while the city's total water use decreased by 15 percent. Portlanders have embraced water-saving technology and changed behaviors to make the most of each drop. Portland's summer water demand has also decreased due to changing land use development patterns. This has resulted in less land being used as lawns and outside vegetation that require irrigation.

Will there be enough water in future years as our climate changes?

The Pacific Northwest's future climate will be warmer, with more frequent hot, dry summers, wetter winters with heavier rainstorms, and less winter snowfall. Winters with little snow (such as 2014/2015) are increasingly likely to happen over the next few decades. Fortunately, unlike many other Western water supplies, Portland's primarily rain-fed Bull Run water supply does not depend on snow. Portland's groundwater supply, which is also not expected to be significantly affected by the anticipated decline in snow precipitation, also increases the water system's resilience to climate change and can be used to supplement Bull Run when needed.

What can I do to use water wisely during the summer?

At this time, Portland does not have a water shortage; there is sufficient water supply to meet demand. This is partly because Portlanders have done a great job over the last few decades of using water wisely, which has reduced overall demand. In the summer, a lot of people use more water outside. Customers can learn how to use water outdoors wisely at our website.

How much water does my garden need during the summer?

We work with the Regional Water Providers Consortium to publish the Weekly Watering Number, which describes the amount of water plants need each week. The weekly watering number is updated every Thursday from April to September.

Groundwater: Here When We Need It.