How Bull Run is protected 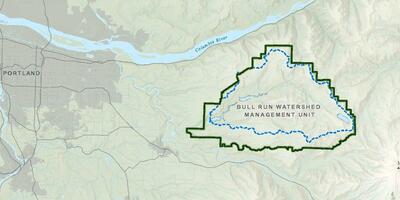 Portland has excellent water in part because generations of lawmakers, City staff, and community members have worked to protect Bull Run.
On this page

Portland's main source of drinking water is the Bull Run Watershed, a protected area about 25 miles east of the city that drains into two water supply reservoirs.

The US Forest Service owns 94 percent of the land in the watershed, while the City of Portland owns 5 percent and the Bureau of Land Management owns 1 percent.

Portland has excellent water in part because generations of lawmakers, City staff, and community members have worked to protect Bull Run.

Sign up for notifications about projects in the Bull Run Watershed

A history of Bull Run protection

1895: The City of Portland starts using water from Bull Run. City leaders advocate for greater federal protection of the watershed.

1904: President Theodore Roosevelt signs the Trespass Act, which restricts access to the Bull Run Reserve. Among other restrictions, the act prohibits grazing livestock in the reserve.

1977: Congress replaces the 1904 Trespass Act with a new law called the Bull Run Act. The Bull Run Act establishes the Bull Run Watershed Management Unit area and formalizes the ways the Forest Service and the Water Bureau work together to manage the area.

1994: The US Forest Service adopts the Northwest Forest Plan to protect the Northern Spotted Owl and the old-growth forest habitat on which the owl depends. This plan shuts down logging in old-growth forests on federal land in the Pacific Northwest.

1998, 1999, and 2005: The federal government lists (as threatened species under Endangered Species Act) four species of fish that use the Bull Run River.

2008: The Water Bureau finalizes its Habitat Conservation Plan, which describes how it will protect and improve aquatic habitat from 2010 to 2059. The goal of the plan is to continue water supply operations while complying with the Endangered Species Act and Clean Water Act.

2010: Portland City Code is updated to make clear that the land the City owns within and adjacent to the Management Unit is to be protected consistent with the laws passed for federal land in 1996 and 2001. The code prohibits cutting trees except to protect the water supply, people, and infrastructure.

2012 and 2017: The Water Bureau commits to specific Bull Run protections as part of a 2012 variance to the federal treatment requirement for the microbe Cryptosporidium. The 2017 commitments are part of a compliance agreement with the Oregon Health Authority.

2019: Portland voters approve a Charter Amendment to further protect City-owned lands in the Bull Run Closure Area. Including protections in the Charter means those protections can only be changed by voters, and not by a majority vote of the City Council.

Here are the main rules that apply to the Bull Run now.

The City's regulatory compliance agreement with the Oregon Health Authority

The Water Bureau has a regulatory compliance agreement with the Oregon Health Authority about how to keep Portlanders safe from the microbe Cryptosporidium until the bureau finishes building a filtration facility in 2027. This agreement affects many parts of bureau operations, including how staff work in Bull Run.

The Bull Run Water Supply Habitat Conservation Plan (HCP) describes the bureau's work to comply with these two major environmental laws. Under the HCP, the bureau is improving flow, temperature, and habitat in the lower Bull Run River and the broader Sandy River Basin. The plan describes 49 habitat conservation measures the bureau is implementing over a 50-year period. These measures are designed to restore and protect habitat for Endangered Species Act-listed fish species as well as for other fish and wildlife. The bureau began implementing the HCP in 2009. The bureau has published annual compliance reports since 2010.

This report fulfills the annual work plan reporting commitment described in the 2007 Bull Run Watershed Management Unit Agreement between the Portland Water Bureau and the US Forest Service.