About the Bull Run Watershed 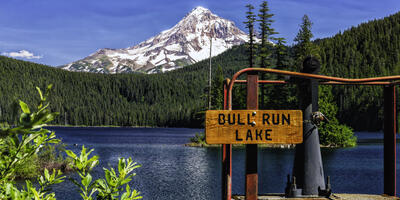 Located less than thirty miles east of Portland, the Bull Run Watershed's unique geography and rich history make it an iconic part of the story of our region. It serves as the primary drinking water supply for nearly one million people in the Portland metro area.
On this page

Just 26 miles east of downtown Portland lies a beautiful, temperate rainforest full of centuries-old trees, glistening streams, and rushing rivers that provide most of the city's drinking water. Most Portlanders have never seen it up close, but in its 102 square miles, the Bull Run Watershed touches the lives of Portlanders every day with its abundance of nature's most important resource.

Although this fresh, natural water source is tapped straight from the river, it takes a lot of human ingenuity and management to turn it into drinking water. The City of Portland operates two dams on the Bull Run River to create the reservoirs that store water for the dry summer months, where levels are constantly monitored to ensure consistent supplies. From these reservoirs, the water is treated and then, using a combination of gravity and pumps, transported to town through a series of giant steel pipes where it supplies our vast water system. Careful quality control is an everyday part of our job that we accomplish through rigorous testing and analysis.

We know how important the Bull Run is to the quality of life in the Portland area, and we take pride in the protections that are in place to preserve this precious resource. The area within and around the watershed is off-limits to logging, mining, and public recreation. However, we provide guided tours of the Bull Run through our public education program that helps kids and adults alike develop an appreciation for this invaluable resource. Visit our education page for information on our popular tours of Bull Run.

For thousands of years, the lands surrounding the Columbia River were home to a robust network of Native American tribes, each with unique customs, cultures, and languages. With rivers and streams full of salmon runs and dense forests teeming with endless cedars, Native Americans in the inland and coastal areas of Oregon prospered here and throughout the Northwest.

Over the millennia, tribes living near the Columbia River blazed trails over the Cascade Range, including areas around the Bull Run Watershed. The trails were used to reach trading partners and hunting grounds, and to harvest berries, a common and traditional source of nourishment among the area's tribes. One of those tribes, the Klickitat Tribe, is said to have referred to Bull Run Lake as Gohabedikt, meaning "Loon Lake."

It was these same trails that early European settlers used to navigate over the mountain ranges on their way to the Willamette Valley and, eventually, to the muddy riverside that would become Portland.

The path to Bull Run

By the late 1800s, Portland was growing quickly outward from the banks of the Willamette River. But as it expanded, a combination of careless sewage disposal, industrial pollution, and logging operations polluted the young city's water supply. With the population growing larger and thirstier, the lack of clean water became the focus of citizen protests.

The situation eventually led the state legislature to establish City control over the water system and the bonding authority to finance it. The 15-member Portland Water Committee was created and tasked with establishing a municipal water works.

In 1886 the committee tapped Colonel Isaac Smith, a civil engineer who had previously served as an officer in the Confederate Army during the Civil War. He led an exploratory expedition to Bull Run to determine the feasibility of a gravity-fed water system that would bring its crystal clear river water down into the Portland area. After a lot of political maneuvering and negotiating with landowners and businessmen, construction on the project began in 1893.

The work crews that dug the ditches and built the pipes were primarily Italian immigrants living in the Bull Run area. With Smith serving as Chief Engineer from 1885 to 1897, they laid 24 miles of pipelines through old growth forest and treacherous mountain terrain. On January 2nd, 1895, water flowed for the first time all the way from Bull Run into Portland and finally, the Portland area had access to a reliable, clean, and healthy water supply.

In 1904, President Theodore Roosevelt signed Public Law 206, also known as the Bull Run Trespass Act, which restricted access to the Bull Run Watershed. This meant that grazing, among other things considered trespass, would not be allowed in the area and that the immense diversity of wildlife and plant life there would remain undisturbed. With the stroke of a pen, Roosevelt launched a legacy of rigorous protections for Bull Run that would eventually outlaw logging in the area as well. Prevention of most human uses in the watershed served to protect this cherished piece of Portland's heritage. If you'd like to know more about the history of Portland's water system, be sure to check out Casey Short's excellent book, Water: Portland's Precious Heritage.

It may be surprising to learn that even though the Bull Run River is near Mount Hood, it is rain—not snowmelt—that provides the majority of the water. Because of a ridge that separates the Bull Run from Mount Hood, glacial melt from the mountain does not reach the river.

Plenty of rain does, though. The Bull Run Watershed averages 130 inches of precipitation per year, and the heaviest rains occur from late fall through spring, filling the two reservoirs there for storage. Because rain is scarce during the summer season, the water stored in the reservoirs is essential for meeting summer water demand in town.

With dry summer weather comes the drawdown season. Drawdown is when the Portland Water Bureau begins to take more water out of the reservoirs than streamflow brings in. During this time, streamflow comes from infiltrated rainwater stored in forest soils and rock formations. Streamflow provides about half of the dry season supply and gradually decreases over the summer. Fall rains typically replenish the supply in late September, but in dry years this can happen as late as November or December. Learn more about our seasonal water supply planning.

Fire in the watershed

Fire occurs naturally in the Bull Run Watershed, like in all forests, though large fires are very infrequent in temperate rainforests. There is evidence that major, high-severity wildfires burned the watershed in 1493, 1663, 1693, 1873, and 1881. The fire in 1493 burned nearly the entire watershed, while the others averaged roughly 5000 acres, or about eight square miles. While infrequent, large wildfires can degrade water quality if sediments and nutrients are washed into streams during and after a fire.

Most fire-related changes to water quality typically occur during the first winter following a fire when heavy rains hit the burned soils. Hot, dry weather and strong east winds create the most dangerous conditions for wildfires in the Bull Run. The Portland Water Bureau and the US Forest Service manage a comprehensive Bull Run wildfire protection program that includes measures for prevention, detection, and wildfire management.

Full of pikas and rabbits, moles and shrews, opossums and bats, coyote and red fox, black tail deer and black bears too, Bull Run is home to an abundance of wildlife year-round. In the nearly 150-square-mile protected area in and around Bull Run, the forest floors and creeks are home to 53 species of mammals, 7 reptiles, 16 amphibians, and 19 fish.

And let's not forget our winged friends. In the sweeping skies above the watershed and in grand nests in the forest canopy, the watershed is also home to an abundance of birds.156 species of birds live in the area, including warblers, woodpeckers, and owls, and a total of 88 species breed there. All in all, it's a true who's who of the animal kingdom.

But it's not just animals that give the watershed life. Bull Run is thick with forests of old and second-growth trees such as Douglas fir, western hemlock, western red cedar, and Pacific silver fir that cover about 95 percent of the watershed's mountainous terrain. These forests provide a thick canopy cover and a thick layer of organic material on the ground that nourishes smaller plants such as salal and sword fern. This rich layer also acts as a filter for the water as if flows into the streams that then flow to the river below.

The geology of the Bull Run watershed is dominated by rocks formed during its volcanic history, predominantly Columbia River basalts and andesite. Exposed rocks in the watershed include layers from countless volcanic eruptions over many millennia. The rich volcanic soil here and elsewhere throughout the Northwest provides fertile ground for the lush forests that we know so well in our region.

Elevations range from 750 to 4,750 feet above sea level, creating a topography that varies from low-relief lava flow surfaces to steep-walled canyons. Over the ages, creeks in the watershed have carved deep canyons and paths through these lava flows, eventually landing on a smooth bed of basalt that forms the bed of these mountain streams.

Water, uninterrupted: Your investments in Portland’s water systems are paying off.