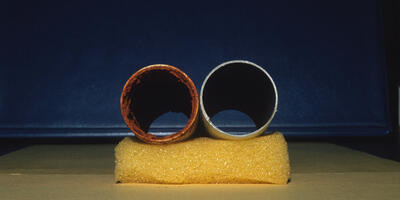 Every second of the day, more than 2,250 miles of pipe deliver water throughout the Portland area. If you stretched those pipes end to end, you'd have to drive to Mexico City to catch a drop. How does it all work? Start here for the basics on the visible and invisible parts of our water system.
On this page

Where does my tap water come from?

Below ground, we also operate the Columbia South Shore Well Field (CSSWF), a groundwater well field capable of producing close to 100 million gallons per day of high-quality drinking water. The well field is the second-largest water source in Oregon, with about half of the daily capacity of Portland's Bull Run. Groundwater from the the well field is used as a secondary source for customers served by the Bull Run supply and also provides supplemental supply during the high-demand summer season. Together, the Bull Run and the well field give us the flexibility and resiliency to provide water to the entire Portland area under any circumstances.

Portland's treatment is changing in the coming decade. To maintain maximum resilience in our system and to abide by federal drinking water regulations, by 2027 Bull Run water will be filtered.

How water moves through the city

How does my tap water travel to Portland?

Water flows to Portland residents by gravity flow, which reduces dependence on pumping and its expensive energy requirements. Pumping is only required in the west hills of Portland and for supplemental groundwater needs. Throughout the city, water travels underground through distribution mains to individual homes and businesses. From the water main, a smaller pipe travels to the water meter at each home or business that has water service. The water passes through the meter on its way to your home, which measures your household usage. Household pipes deliver water to your tap.

Emergency pump connections at pump stations can be used during a prolonged power outage. A mobile generator or portable pumping unit (gasoline or diesel engine powered) can be hooked up to these connections to supply the distribution reservoir.

Who owns the water pipes and infrastructure?

Since the Portland Water Bureau is a public utility, the mains and the water meter are, generally, owned by the City of Portland. Beyond the meter, the service line and household pipes are the responsibility of each property owner.

How much water is provided by the Portland Water Bureau?

Approximately 35 billion gallons of water are provided to Portland-area customers annually. The City of Portland provides water to nearly one-quarter of Oregon's population. The city's service area covers Portland residents and the residents of 20 suburban cities and water districts.

What are water pipes made of?

What's the deal with fire hydrants?

Residential areas in Portland have fire hydrants at a standard of one every 1,000 feet, as the crow flies. In higher-density areas, the standard is every 500 feet. In Downtown there are two hydrants for each intersection. These numbers add up— to nearly 15,000 hydrants! Hydrants are color-coded to give important information to Portland's firefighters.

Who controls the flow and pressure?

Property owners are responsible for the condition of all plumbing and pipes that water flows through after it leaves the water meter at the street. Some water flow problems are temporary. We provide water to all services with a minimum pressure at the water meter of 20 pounds per square inch (psi). Most homes receive water at a pressure between 40 and 80 psi. We monitor pressure throughout Portland. Learn more about how you can troubleshoot water pressure and flow issues.

What's with all the big green storage tanks?

Water storage tanks have two primary functions: with their higher elevation, the tanks improve and maintain pressure throughout the system, ensuring that a particular neighborhood in a service area will have proper water pressure during all times of day, no matter what the season. Secondly, water tanks ensure that there is enough water supply throughout the city to fight fires.

Tanks come in all shapes, sizes, and configurations. They may be buried underground, partially buried, ground level, standpipes (taller than they are round, so they look like a tall cylinder) or elevated (either on multiple columns, or a single "Hydropillar").

Portland has 64 tanks and all of them are constructed either of concrete or steel. The concrete tanks hold between sixty thousand and four million gallons of water. The transmission tanks at Powell Butte, however, have even greater capacity.

Beneath the grassy hills and tree-covered grounds of Powell Butte lies a vital part of our water system: two large concrete tanks that can hold up to 50million gallons of water each. At over 600 feet above sea level (as high as the tallest building in downtown Portland), Powell Butte is lower than the Bull Run watershed and higher than downtown. This makes it the perfect location to store drinking water and use gravity to move it throughout the city's vast system of reservoirs, pipes, and tanks to the faucets in your home.

The water stored here at Powell Butte, along with water stored elsewhere in the city, creates water pressure, maintains a reserve for firefighting, and allows us to deliver enough water even as demand changes throughout the day.

Building reservoirs to store 100 million gallons of water is no easy task. These reservoirs need to be big: each one buried here has an area the size of four football fields and a height of three stories. They also need to be strong: the columns and walls of these important structures were specifically designed to stand up to earthquakes and the force of all that water moving inside.

With expansive trails that weave through over 600 acres of natural areas above the reservoirs, the nature park at Powell Butte is a popular destination for daytime hikes and family trips. Forests, grasslands, seasonal wetlands, and oak savanna—as well as some great views—are all on display. The public is invited to explore the many trails and natural wonders this gem of Portland has to offer.

The drinking water reservoirs at Washington Park are a well-known Portland landmark and have been vital parts of our water system that feed water to the West Hills. In its original design, an upper and lower reservoir occupied the site, along with two gate houses, a weir building, three pump houses, a generator house, and associated underground piping. The reservoirs were part of an ingenious gravity‐fed drinking water system constructed more than 120 years ago in the 1890's. The system was active for more than a hundred years before the current construction project began.

Upgrading the reservoirs for the future

We're rebuilding the Washington Park reservoirs. The reservoirs that have served the city since 1894 will be replaced with a new 12.4-million-gallon, seismically reinforced underground reservoir. Learn all about the project at our Washington Park Reservoirs Improvement Project page.

Learn about everything we're doing to enhance and preserve the Mount Tabor reservoirs and their important role in our city by visiting our Mount Tabor Reservoirs page.

In 1912, Simon Benson, a local businessman and philanthropist, donated $10,000 to the City of Portland to purchase and install 20 bronze drinking fountains, now known as Benson Bubblers.

Local folklore tells us that Simon Benson donated the 20 bronze drinking fountains as an effort to keep loggers out of the saloons at lunchtime. Others say that Benson was inspired after seeing a little girl crying at a Fourth of July parade because she couldn't find a drink of water. Either way, the Benson Bubblers have become an enduring historical legacy here in Portland.

Portland's first Benson Bubbler was installed at Southwest 5th and Washington. Another one of the original Bubblers was installed in front of Benson's home, where it remains today, to commemorate his generous gift to the city.

The remaining 18 original bubblers were installed by 1917. Currently, the Portland Water Bureau proudly maintains 52 of the four-bowl Benson Bubbler fountains throughout the city.

The city currently boasts 52 fountains and 74 one-bowl variations. Though the single-bowl variations look like Benson Bubblers, they are not. In fact, in the 1970s, the Benson family asked that the installation of the four-bowl fountains be limited to certain downtown boundaries so as not to diminish their uniqueness.

And while most Benson Bubblers are, indeed, downtown, there are a couple of notable exceptions. In 1965, the City of Portland presented a bubbler to Yosaku Harada, mayor of Portland's oldest sister city, Sapporo, Japan. Closer to home, Sam Hill, a friend to Simon Benson, asked to have a bubbler installed at his Maryhill Museum of Art.

We are committed to using water wisely and have made significant changes in the design and operation of the bubblers over the years to improve their water efficiency. Most recently in 2005, we installed small flow-restricting devices in the bubblers to further reduce the amount of water that each fountain uses. The devices don't affect the physical appearance of the fountains, but they do reduce the amount of water the fountains use by an additional 40 percent. As they run freely to keep the water in the pipes fresh, which boosts the water quality in the rest of the distribution system too. Today, the bubblers now use less than a tenth of one percent of Portland's daily water demand, yet they still stand proudly as a defining, iconic element of our city's history.

All across Portland, in the North, Northeast, Northwest, Southeast, and Southwest neighborhoods, our decorative and interactive fountains have become a recognizable feature of the city landscape.

Taking care of these gems is an ongoing process. All the fountains are cleaned regularly, and the interactive fountains are chlorinated to the level of a swimming pool. Most of Portland's decorative fountains recirculate water to minimize water use and runoff. Meters have been installed to gauge water use and electrical consumption. Finally, we work with the Regional Arts & Culture Council to maintain the aesthetics of each fountain. Sculptures undergo restoration when needed, in order to present the art as originally intended.

Every one of them has a unique story and every Portlander has a favorite one. Visit Portland Parks' page about our city's fountains to learn about each one and find the fountain closest to you.