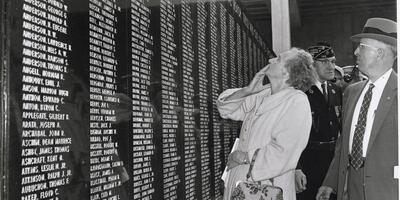 As a result of aging infrastructure, the City of Portland prioritized visitor safety earlier this year at Veterans Memorial Coliseum by removing half-century-old granite panels from one memorial wall with plans for the other. Some of the large, heavy panels, inscribed in a golden color, had become displaced from their original positions and more were at risk of shifting.

The two memorial walls, standing steadfast in sunken gardens flanking the entrance to the Coliseum for decades, recognize more than 2,000 Portland-area military members who died in service to this country.

While the original granite memorial wall panels are safely stored and the City explores long-term options to restore the walls and honor veterans at the Coliseum in a meaningful way, a new Digital Veterans Memorial launched ahead of Memorial Day features the names engraved on the memorial walls, memorial history, veteran biographies and even an invitation to submit veteran stories at Portland.gov/VeteransMemorial.

“We’re proud to play a role in remembering Portlanders who made the ultimate sacrifice for their country,” said Karl Lisle, who manages the City of Portland’s Spectator Venues and Visitor Activities Program. “The names on these memorial walls contain thousands of untold stories — and now, we’re finding a way to tell some of those stories.”

Chief Warrant Officer Joseph G. Brown, a Silver Star Medal recipient, is listed on the second of two memorial walls erected at the Veterans Memorial Coliseum and dedicated Oct. 23, 1977 to honor those killed while serving in the Korean and Vietnam wars. An earlier memorial wall was dedicated Sept. 30, 1962 to honor local military members who lost their lives serving in conflicts through WWII.

Brown, a 1963 graduate of Parkrose High School, volunteered for the 1966 draft and eventually earned his role as a U.S. Army pilot in Vietnam. By his second tour, he had transitioned from flying a combat helicopter to a medical evacuation helicopter, or medevac. It was during this tour that Brown flew his last rescue mission. He received wounds that eventually cost him his life after landing in an area of intense combat to rescue wounded Army rangers.

Brown died Feb. 18, 1971 and, like an unknown number of those memorialized at the Coliseum, Brown’s family still lives in the Portland-area. The oldest of six, his brother Larry Brown of Portland still wears a hat to remember his brother’s bravery and sacrifice more than 50 years later. He can often be found reminiscing about his little brother. “I’m very proud of Joe and miss him every day,” Larry Brown says.

The Digital Veterans Memorial provides an accessible opportunity to see the names of those on the original memorial walls, learn about the history of the memorials, read veteran biographies, and even share stories about Portland-area military members who made the ultimate sacrifice for this country.