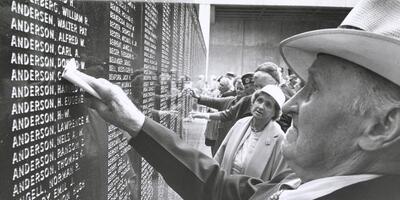 The black granite memorial walls at Veterans Memorial Coliseum are one of Oregon’s largest and most significant veterans memorials. While the memorials have been placed in temporary storage, their story and that of the soldiers they represent will continue to be told.

Decades ago, two separate memorial walls were erected in sunken gardens flanking the Coliseum's entrance. Inscribed in gold with the names of Portland-area soldiers who gave their lives for their country in wartime, the walls are one of Oregon's largest veterans memorials. 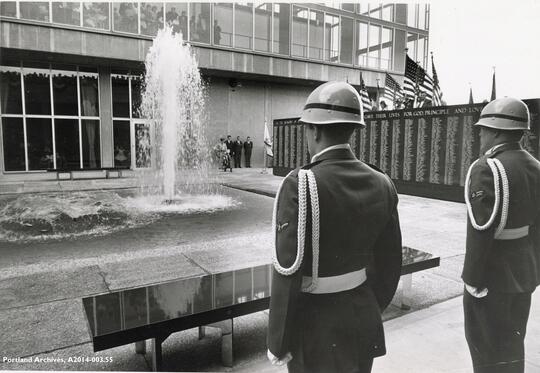 When Memorial Coliseum (as it was originally known) was completed in 1960, it was the largest public arena in the Pacific Northwest, and from its outset hosted a range of concerts, civic gatherings and sporting events. Iconic musicians like The Beatles, Bob Dylan, Jimi Hendrix, David Bowie and Fleetwood Mac performed there. The Coliseum was the original home court of pro basketball’s Portland Trail Blazers, and where the team won the 1977 NBA championship (and played for two additional titles in 1990 and 1992). Designed by legendary Chicago firm Skidmore, Owings and Merrill, the Coliseum was a remarkable technical feat of 1960s engineering, with four massive walls of glass surrounding a freestanding 12,000-seat bowl. The glass concourse overlooks downtown Portland and a moveable curtain opens the whole arena to daylight. The arena itself was conceived as a “living memorial,” honoring those soldiers who served their country by encouraging community.

The granite Memorial Honor Roll wall, as it was originally known, was completed two years after the arena itself, and formally dedicated by Mayor Terry Schrunk on Sunday September 30, 1962 (American Gold Star Mothers Day). Initially it was only one wall—36 feet, 7 inches long and 8 feet, 3 inches high—located in the north plaza. In 24 rows of alphabetically-ordered names beginning with Charles H. Abercrombie and ending with Gabriel Anselmo and John Heartt (two additions carved after the name Jack Zubman), the wall honored 1,667 of the city’s war dead, as defined by living within a 15-mile radius of the city center. An additional inscription at the top of the granite wall reads: “To the memory of a supreme sacrifice we honor those who gave their lives for God, principle and love of country.”

A 10-square-foot pool was also dedicated beside the Memorial Honor Roll that day in 1962, featuring with three centrally-located fountains surrounded by multicolored glass mosaic tile. The family of the late Lieutenant David R. Kingsley, a Portlander killed in action in World War II and posthumously awarded the Medal of Honor, were among those attending the ceremonies. The second granite memorial wall was dedicated on October 23, 1977, with an emphasis on adding names from the Korean War and Vietnam.

Honor rolls are a traditional form of war memorial, and became common in America after the Civil War (1860-65), particularly in smaller cities and towns. For many Americans, the best-known example of a national names-based monument is the Vietnam Veterans’ Memorial in Washington, DC. Its designer, Maya Lin, was selected by a seven-person jury led by longtime Portland architect Pietro Belluschi. After leaving Portland in 1951 (to become dean of the Massachusetts Institute of Technology’s architecture school), Belluschi sold his local office to Skidmore, Owings and Merrill, the Coliseum’s designer. 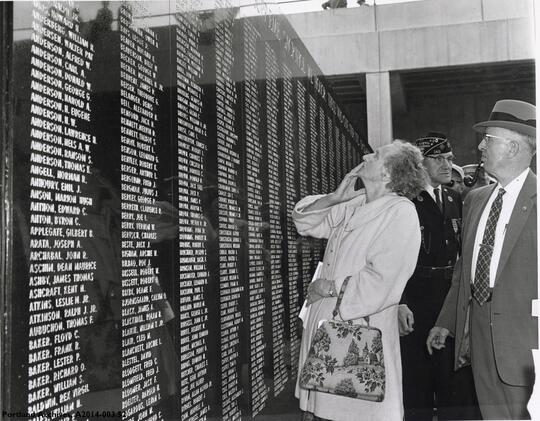 The memorial walls at Memorial Coliseum were also inspired by a billboard erected in the South Park Blocks by the City of Portland after World War II, which listed the names of local casualties; the billboard remained for over a decade, when names of Korean War dead were added, and was only disassembled after the Memorial Coliseum wall was dedicated in 1962.

Though the memorial walls were removed in 2022, this is not the final chapter. As the City of Portland pursues its plan to restore Veterans Memorial Coliseum over the coming years, the memorial walls will be restored, and their accessibility reconsidered, in order to make sure that future generations will be able to come and honor the brave men and women who gave their lives for their country.