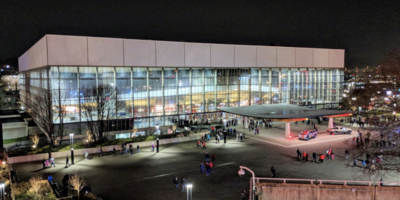 For more than half a century, Veterans Memorial Coliseum (VMC) has hosted some of Portland's most famous events — from the Trail Blazers' 1977 NBA championship to concerts by the Beatles and Elvis Presley. Owned by the City of Portland and operated by  RIP City Management, this 12,000-seat arena and event venue continues to serve as a community gathering space in the Rose Quarter.

Many unique features make the Coliseum stand out. Its exterior walls form a perfect square, each side exactly the length of a football field. Enclosed by gray-tinted glass walls, the concourse level is cantilevered several feet out from the lower event level — making the building appear to float above the ground from some viewpoints. Visible through the glass walls is the slightly egg-shaped seating bowl, giving the building its nickname: “a teacup in a glass box.” Looking out, visitors can enjoy views to the north and west across the Willamette River.

Home to the Portland Winterhawks hockey team, the Coliseum has hosted numerous sporting events over the years, including the Dew Tour for extreme sports and the Davis Cup tennis tournament. The most famous tenant, the Portland Trail Blazers, played at the Coliseum for 25 years. In the infamous 'Game 6' of the 1977 NBA Finals, they defeated the Philadelphia 76ers to win the NBA championship. Starting April 5 of that year, the team began a sellout streak of 814 straight games, lasting until 1995 — the longest streak in the history of the National Basketball Association.

Concerts, family shows and special events have also been a mainstay at the historic venue. The Beatles, Elvis Presley and Led Zeppelin have appeared at the Coliseum, along with Billy Graham, Ralph Nader, Barack Obama and the Dalai Lama. The arena hosts many annual events, such as the Rose Festival Grand Floral Parade and countless high school graduations.

1950s: Business and civic leaders identify the need for a venue for conventions, exhibitions and sports events

1960: Memorial Coliseum opens; designed by Skidmore, Owings and Merrill, it is recognized as “a technological feat of engineering and operation unrivaled by any other large civic structure in the Pacific Northwest”

1970: Trail Blazers begin playing at the Memorial Coliseum, after Harry Glickman is granted rights to start an NBA franchise in Portland

2011: Arena renamed Veterans Memorial Coliseum by the Portland City Council to re-emphasize the building’s role as a tribute to veterans of World War II and the Korean War

The Coliseum has been a staple in the Portland community for six decades. To stay modern, relevant and financially viable, this iconic venue will require significant reinvestment. Many critical building systems are original and in need of replacement and upgrades. Many amenities expected by event goers – comfortable seats, accessible restrooms and diverse food and beverage offerings – are also lacking. Over the past decade, the Spectator Venues Program has completed a number of studies and by the end of Fiscal Year 2019-2020, had invested $12.8 million in repairs and improvement projects at the VMC.

In 2020, the City began working with a design team and Rip City Management on a multi-year reinvestment strategy for the building. The strategy is expected to unfold in a series of steps leading to construction activities that may take place as a single project or multiple projects over time. Currently, $40 million has been identified for physical improvements; however,addressing the full needs of the VMC will require additional funding.

The initial work on the reinvestment strategy was completed in October 2021 and summarized in Volume I. The next phase of design work is anticipated to begin in early 2022. While construction dates are still unclear, it is hoped that a major reinvestment effort will begin in 2024.