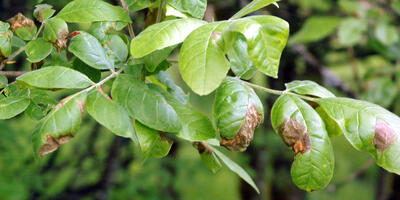 These tree pests and diseases are common in the Pacific Northwest, but this is not an exhaustive list.
On this page

If you need additional assistance diagnosing your trees, contact the Oregon State University Plant Disease Clinic or your local arborist.

Anthracnose is a fungal disease that causes leaves to brown and drop in middle to late summer.

Trees affected by aphids are commonly misreported as dripping sap. These small insects suck sap from leaves and excrete a clear, sticky honeydew that can drop onto cars and anything under the tree. Honeydew sometimes encourages a black fungal growth called sooty mold.

Dutch elm disease is caused by a fungus and is highly lethal to American and European elms.

Blockage of water-conducting tissues indicated by flagging (localized leaf wilt, yellowing, and browning) results from infection with the lethal fungus. The disease is spread primarily by elm bark beetles. Because fresh pruning wounds attract the elm bark beetle, elm pruning is restricted to times of beetle inactivity (October 15 to April 15).

Hawthorne leaf blight manifests as small reddish-brown spots; the area between spots will yellow and the leaves will eventually fall off.

Thousand cankers disease is a fungus that causes cankers to develop under the bark of an infected tree, often leading to the death of the tree.

Verticillium wilt is caused by a soil-dwelling fungus that causes leaves to brown and die.

Several species of caterpillar create a web or tent in the branches of trees and feed on the tree’s foliage. Web worms or tent caterpillars are commonly found on fruit trees, cottonwoods, aspen, ash trees, among other species