The Historic Flowering Cherries of the Albina Tree Planting Program 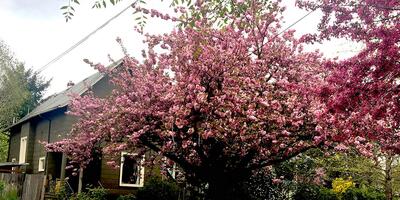 Take a stroll in Portland and you will likely see many beautiful flowering cherry trees, particularly in the Albina District - but who can we thank for these spring beauties?
Published
April 7, 2016 12:57 pm
Updated
April 14, 2021 12:57 pm

With the arrival of spring, many trees in the urban forest are budding and blossoming in spectacular displays of color. Take a stroll in Portland and you will likely see many beautiful flowering cherry trees, particularly in the Albina District (Boise, Eliot, King, Sabin, Overlook, Piedmont, and Humboldt neighborhoods). While they are certainly picturesque this time of year, these trees also have a deep connection to the history of the neighborhood. They point back to the grassroots activism of the local African-American leaders who worked to beautify the community.

Following World War II and the Vanport Flood, Portland's African-Americans faced prejudiced real-estate zoning or "redlining," which effectively restricted the community to Albina. Urban development projects, like Memorial Coliseum and Emanuel Hospital, further displaced significant numbers of black business owners and residents. By the 1960s, while much of the city celebrated relative affluence, members of Albina's black community were suffering from poverty and city disinvestment in their neighborhoods. 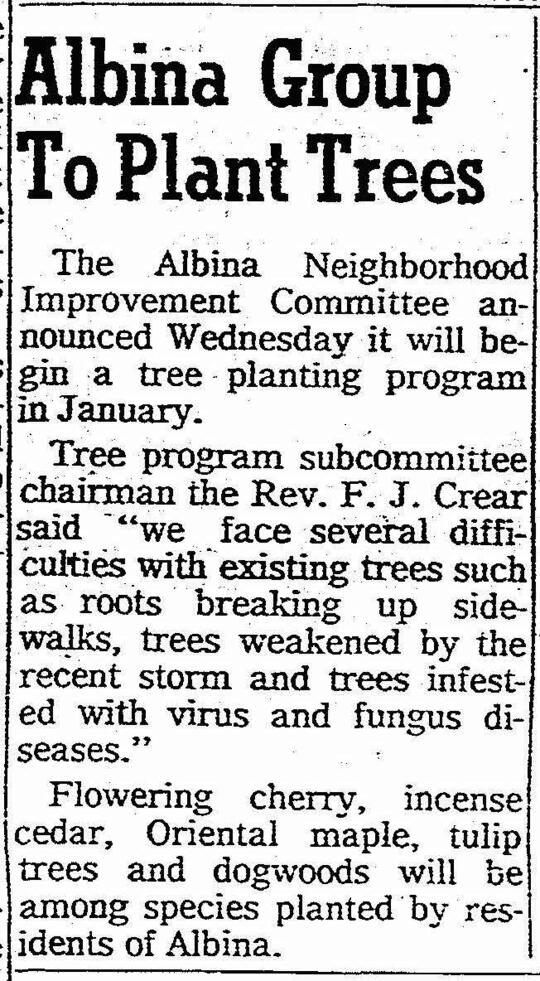 In 1961, local black leaders like Mrs. Opal Strong, took matters into their own hands. Organizing as the Albina Neighborhood Improvement Committee, local leaders obtained $1 million in federal funds to revitalize the neighborhoods. To beautify the area and foster a deeper sense of place, the Albina Tree Planting Program, part of the larger revitalization project, began planting trees in 1962. Headed by Rev. Faddie J. Crear, the program included both black and white residents and many celebrated it for its inclusiveness.

Throughout the twelve years of the program, leaders favored planting the Kwanzan flowering cherry. With so many trees planted, it is not easy to date conclusively, but it is fair to say that most mature flowering cherries in this area are associated with the program. The program also planted other species including: incense cedar, japanese maples, dogwood, and tulip trees. In 1964 alone, the program planted over 500 trees in Albina!

Today, many of these flowering cherry trees have grown beyond the confines of their smaller planting strips, thereby lifting up sidewalks and creating hazards. Additionally, many of these trees, while beautiful, have come to the end of their life spans. Just this year, members of the Albina Neighborhood Tree Team obtained Urban Forest Stewardship Funding to help lower-income neighbors to remove their dead or dying cherry trees, and replace them with a more diverse collection of trees. Selecting new flowering trees that are better suited for the smaller planting strips will continue the grassroots tradition of Albina.

As you admire the spring blossoms, take a moment to appreciate our neighbors, past and present, who have taken to the shovel, to plant new trees. Their investment rewards us all.