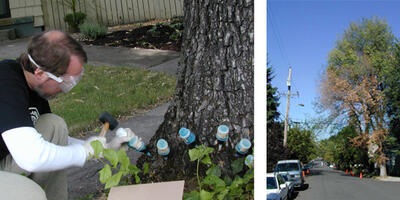 Dutch elm disease, or DED, is one of the most destructive plant pathogens in the United States and Europe. It has killed millions of elms despite efforts to control it. With approximately 3,500 susceptible elms throughout Portland, PP&R Urban Forestry works diligently to manage the impact of DED.
On this page

No Elm Pruning From April 15 to October 15

To help protect Portland's elm trees, pruning any species of elm between April 15 to October 15 is prohibited.

The City Forester, or the Forester’s representative, may waive this prohibition when it is deemed necessary to remove hazards or maintain clearance. Suckers and small branches less than 1-inch in diameter growing from the base of an elm tree may be pruned year-round.

All pruned elm wood must be disposed of properly to prevent the spread of infection. Elm wood is not allowed to be stored as firewood. All elm wood must either be chipped or de-barked and buried. For more details, see the procedures for elm wood disposal.

Dutch elm disease (DED), is caused by a fungus and is highly lethal to American and European elms. The fungus spreads through:

The main visual symptom of DED, known as “flagging,” is a sudden wilting or drooping of leaves in the tree, often on a single branch or limb. Flagging leaves quickly turn from grey-green to brown as the fungus invades the vascular tissue of the tree, blocking the tree’s water supply.

Because fresh pruning wounds attract the elm bark beetle, elm pruning is restricted to times when the beetle is not active. Also, the state of Oregon has declared an emergency quarantine of all elm wood. Elm wood must be chipped or de-barked and buried, and cannot be stored for firewood.

Recent elm hybrids have been developed to be less susceptible to DED. This does not necessarily mean that they are immune to the disease, and proper precautions should be taken with their care and maintenance.

Fungicide can be injected into elm trees as a preventative treatment. A certified arborist must supervise the fungicide injection procedure. Save Our Elms and affiliates, as well as local nonprofit organizations bring communities together to fundraise, inoculate elm trees, and replant trees that have been removed due to Dutch elm disease.

These fungicides are not 100% effective and there are no known cures for DED. However, a dedicated community with clear goals can take steps to slow the spread of DED in affected urban environments.

DED is caused by a fungus, Ophiostoma spp., which invades the vascular tissue of elms and prohibits water movement in the tree. There are three ways the DED fungus spreads: bark beetles, root grafts, and human activity.

Elm bark beetles breed, feed, and overwinter in elm wood. In infected trees, spores of the DED fungus stick to the backs of bark beetles and are transported to healthy elms when beetles emerge to feed.

The fungus spreads most rapidly through root grafts, which form between trees growing in close proximity.

The ordinance specifies that it is unlawful for elm trees infected with DED to remain on any lot or parcel of land in the city. This ordinance was codified in Title 11 Trees section 11.60.060C by Portland City Council in 2011.

Using a five-pronged management approach, Urban Forestry addresses DED from the angles of preventing the disease and regulating the elms that are already infected.