Neighborhood greenways are quiet, slow streets that are easy to walk, stroll, roll, bike, or play in. The Portland Bureau of Transportation (PBOT) is building out 25 miles of new greenways in East Portland and designed a “Go By Greenways” contest to make it fun to explore new ones in East Portland.

"Go By Greenways" is now over. We hope to return next summer.

What is "Go By Greenways"?

Go By Greenways is a scavenger hunt you can play while exploring two new neighborhood greenways in East Portland, one running east-west along NE Holladay, Oregon, and Pacific streets (HOP for short) and one running north-south along the 130s.

Check out this short Sunday Parkways video on how to play. 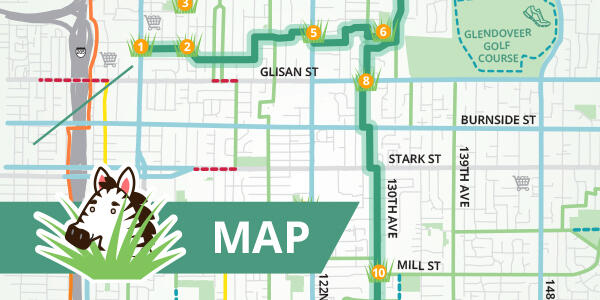 What can I win?

The "Go By Greenways" game is now over. We hope to be able to do it again next summer!

How to explore your new neighborhood greenways

The 130s Neighborhood Greenway runs north and south along numbered avenues near the 130s in East Portland. The route makes its way along 128th, 129th, 130th, and 131st avenues at various legs along this journey. Despite the jog between streets, the 130s Neighborhood Greenway provides an easy, continuous way to bike or walk from the I-84 path to SE Foster Road, providing a calmer route than biking along bustling 122nd Avenue. It links to TriMet bus lines on NE Glisan Street, SE Division Street, SE Powell Boulevard, and the MAX line on E Burnside Street. It connects people easily to David Douglas High School, as well as North Powellhurst, Lincoln Park, and Gilbert Heights elementary schools. And it provides an easy route to green space at John Luby, East Holladay, Lincoln City, and Gilbert Heights parks.

Try biking parts of these greenways with this easy 6-mile loop route.

Neighborhood greenways are much more than a street. From PBOT's years of experience building them, we've seen the many ways community members make them their own by painting intersections, displaying art, or by hosting events and large-scale community projects.

Take our survey to tell us what you'd like to see on your greenway:

Contact our 823-SAFE line for safety or traffic concerns along neighborhood greenways.

What are Neighborhood Greenways?
Plan your Travel With Our Interactive Bike Map
Bike and Walk Maps of Portland