Information
Speed limits help keep yourself and others safe on our streets.
On this page 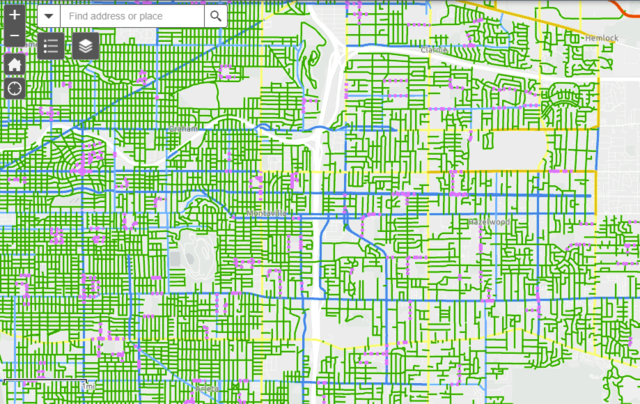 Map data provided may not reflect unknown, recent, or pending changes, and the City of Portland assumes no liability for errors or omissions. Please email us for questions or corrections.

What Makes a 'Safe Speed'

In urban places such as Portland, speed limits must account for people traveling in different ways: walking, driving, using mobility devices, biking, skateboarding, and so on.

It is important to consider people traveling outside of motor vehicles because they are not protected from the impact of crashes.

We use the following principles to identify safe speed limits:

As part of our Vision Zero work, we reduced speed limits on most residential streets to 20 mph in 2018.

Residential streets make up around 70 percent of Portland’s street network. These streets are typically narrow, have few marked crosswalks, and no bike lanes. Given the tight space and lack of protection for people walking, using mobility devices, and biking, it is extra important that people drive slowly on these streets.

Miles of Street by Speed Limit

Represented as percentages of Portland's approximately 2,100 miles of street

Listed by year, then alphabetically by street name