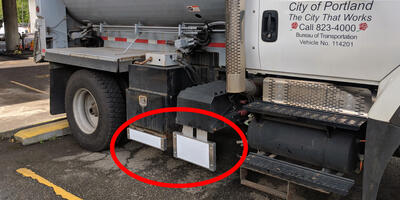 Heavy trucks can present special risks to pedestrians and people biking because truck operators often have limited visibility of people around them.

Side guards can help reduce the risk of heavy trucks by deflecting pedestrians or people biking from a truck's underside during side-impact crashes. Panels or rails cover large gaps on the sides of a heavy truck between the front and rear wheels.

Portland crash data indicate that at least 22 people were killed in collisions involving heavy trucks between 2014 and 2018.

Side guards reduce the chance of death in side-impact collisions involving heavy trucks by as much as 74 percent for people biking and 27 percent for pedestrians. They have been mandatory in China and the European Union since the 1980s but are not required in the United States except where mandated by local or state jurisdictions.

A Standard Feature on City-Owned and City-Contracted Trucks

In addition, we are adding side guards to all existing eligible trucks that have a replacement date of 2022 or later.

The City of Portland is also requiring that all garbage and recycling contractors have side guards by 2022.