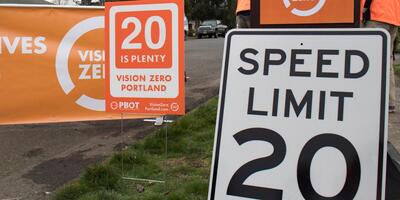 The Portland Bureau of Transportation’s residential speed limit reduction from 25 to 20 mph, completed in 2019, has likely reduced driving speeds by small but significant amounts, according to an analysis conducted in partnership with Portland State University researchers.

Before and after data show that lower percentages of people drove above 25, 30, and 35 mph on streets subject to the speed limit reduction (see Table 1). These reductions in driving speed were found across a majority of the 58 locations analyzed in the study (see map below).

A statistical analysis of the data reveals sharp decreases in the probability of people driving faster than 25, 30, and 35 mph following the speed limit change (see Table 2).

Portland State University researchers write that the reductions in speeds are "noteworthy" due to "the link to crash severity for vulnerable users." Studies have found that even small reductions in speed can have large safety benefits, especially for pedestrians.

Other findings from Portland's study: Speeds tended to be higher on Wednesday, Thursday, and Friday relative to other days, on wider streets, and on streets with better pavement condition.

About three-fourths of Portland streets have 20 mph speed limits (see chart below). A citywide map of current speed limits is available here.

High-end speeds are a key metric for safety

Average driving speeds were essentially unchanged after PBOT reduced the speed limit, measuring about 22 mph across the 58 locations where data was collected.

These seemingly contradictory findings—reduced percentages of high speeds, but nearly identical average speeds—are due to the relatively small number of high speeds that were recorded.

Portland’s findings are based on an analysis of 214,220 data points collected at 58 locations before and after the 20 mph speed limit took effect on April 1, 2018.

Crash data was not included in Portland’s analysis due to lag times in statewide crash reporting. Complete crash data is currently available only through 2018.