Slow the Flock Down! 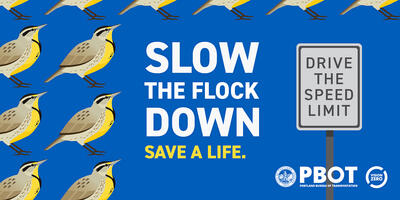 A colorful, tongue-in-cheek message designed to encourage people to slow down when driving.

Slow the flock down! It’s the latest message to people driving, courtesy of the Portland Bureau of Transportation (PBOT) and the Seattle Department of Transportation (SDOT). The campaign, developed by SDOT, reflects the partnership between the Pacific Northwest’s two largest cities.

While supplies last, Slow the Flock Down yard signs are available first-come, first-served, at the following times and locations:

Small changes in speed have big impacts. As people travel faster, the risk of death or serious injury rises dramatically. A pedestrian struck by a person driving 40 mph is eight times more likely to die than a pedestrian struck at 20 mph.

Regardless of how people are traveling, safe travel speeds lower the risk of crashes occurring. When crashes do occur, safe speeds make it less likely that people are killed or seriously injured.

Nationally, according to the U.S. Department of Transportation’s Fatality Analysis Reporting System, speeding is involved in about 30% of all traffic deaths. In 2020, 72% of traffic deaths were males and males aged 16-29 had the highest traffic fatality rate of any demographic group. In Portland, speed is identified as a major factor in half of deadly crashes.