What are PBOT's crossing guidelines based on?

PBOT also referred to work by the City of Boulder, Colorado, when creating the crossing guidelines.

How does PBOT decide when to evaluate an existing crosswalk?

How does PBOT decide when to install a crosswalk enhancement?

The timing for installing crosswalk enhancements varies. Once PBOT staff evaluate a crosswalk and recommend improvements, they add the project to a list containing other needed street improvements. PBOT completes these projects as funding becomes available.

Why doesn't PBOT mark all crosswalks?

In some cases, simply marking crosswalks can decrease safety for people walking. Figure 1 shows that crash rates are higher at marked crosswalks compared to unmarked crosswalks on streets with high traffic volumes and more than two lanes of auto traffic. Additional safety elements, such as curb extensions, pedestrian islands and rapid flashing beacons, are generally needed to improve safety on these types of streets.

As a general rule, PBOT does not mark crosswalks on low-volume, two-lane streets. Figure 1 shows that there is no safety benefit for crosswalk markings on this type of street. PBOT marks crosswalks at traffic signals. 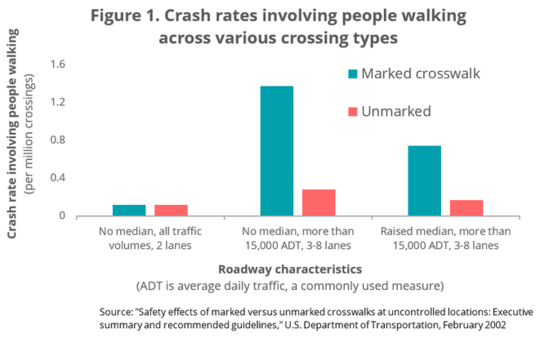 What are examples of crosswalks that PBOT has installed using the guidelines?

PBOT tailors crosswalks to their locations. These three examples show how this happens. 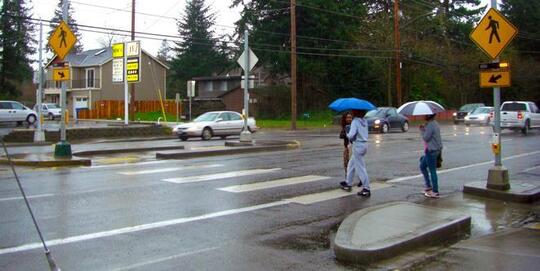 PBOT generally does not mark crosswalks on streets with low traffic volumes (fewer than 4,000 vehicles per day).