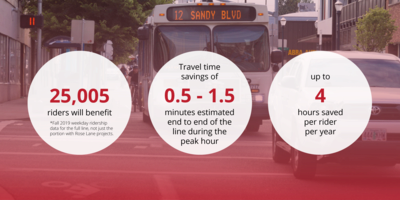 Through the Rose Lane Project, the Portland Bureau of Transportation (PBOT) will help improve bus speed and reliability on NE Couch between 12th and Grand, benefitting lines 12, 19 and 20.
On this page
Download PDF fileDownload the NE Couch project info sheet!1.25 MB

Why is transit priority needed on NE Couch Street between 12th and Grand?

Rose Lane project in this corridor

The recommended design would implement bus-and-turn (BAT) lane* westbound through reallocation of a general-purpose travel lane, helping the bus move faster during congested times. People driving would use the BAT lane to turn into driveways and intersections along the street. In the proposed concept, bicycles will also be allowed to use the BAT lane from 12th to 6th Ave, improving connections to the protected bike facility starting at 6th. Once implemented, we will evaluate benefits to transit and impacts to the surrounding network from this pilot project and make any necessary modifications.

Parallel Rose Lane improvements, implemented through Central City in Motion, will benefit bus riders heading eastbound on these lines (learn more about projects benefitting the Line 12 and Line 20). The segment of NE Couch west of Grand will be considered  in the context of the Earthquake Ready Burnside Bridge Project underway by Multnomah County in collaboration with PBOT.

What the Rose Lane Project will do for riders that travel through this section of the Couch Corridor?

The proposed Rose Lane improvement along this stretch of NE Couch could lead to faster transit trips on all the lines that travel through this area, helping people reach more places:

This project could save riders through this segment between 30 seconds and 1.5 minutes in the AM peak. If you ride the bus through here five days a week, you could get up to 4 hours of your time back each year!

Faster trips mean you can reach more places within a reasonable transit ride. The maps below show how much further a rider could travel in the morning because of the proposed improvement on NE Couch.

For someone departing from E Burnside and 28th at 7:30 a.m., they would be able to reach 11% more jobs within 30 minutes thanks to expanded access into downtown, the Central Eastside and up MLK Blvd. 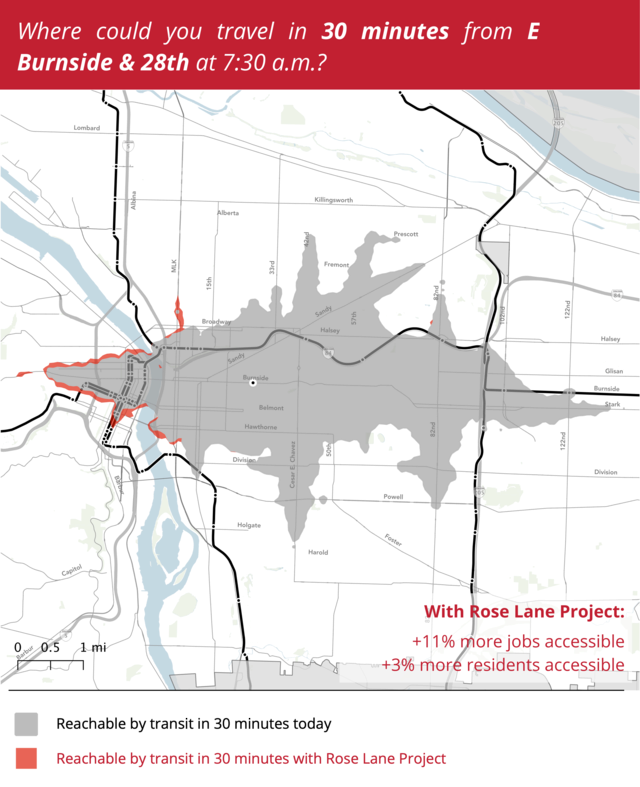 For someone departing from NE Sandy Blvd and 33rd at 7:30 a.m., they would be able to reach 8% more jobs within 30 minutes thanks to expanded access into downtown, the Central Eastside and up MLK Blvd. 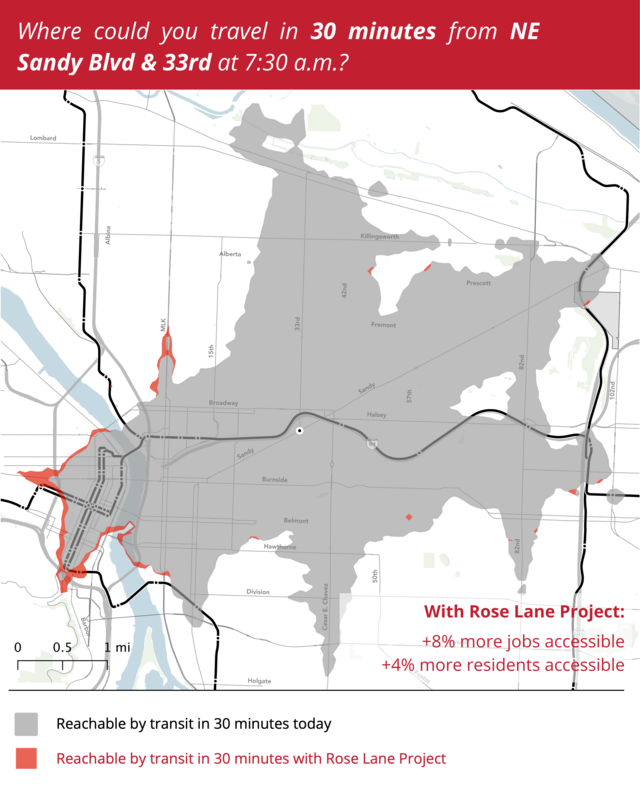 Potential impacts and considerations for other modes

Bike facilities – NE Couch St currently provides a separated bicycle facility from 6th to the west, but 7th Ave will soon become a major bikeway with the upcoming opening of the Earl Blumenauer Bridge across Sullivan’s Gulch. The proposed project would create a shared bus/bike lane, improving connections to these facilities.

Traffic travel time and diversion – The proposed improvements along this corridor will likely cause some additional delay for drivers at peak times. These impacts are not expected to cause operational or safety impacts in the corridor. As we evaluate the performance of the Rose Lane pilots, we may make needed refinements in the future.

Parking removal – Some of the proposed projects along the Line 20 would require parking space to be repurposed. More information will be shared in future outreach as designs are refined

In 2021, we expect to consult the community as we continue refining the design of this proposed project.