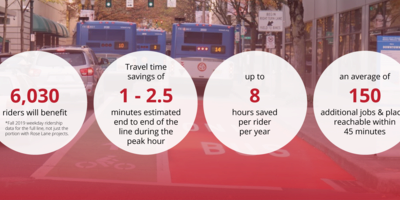 Through the Rose Lane Project, the Portland Bureau of Transportation (PBOT) will help improve speed and reliability for the bus Line 14.
On this page
Download PDF fileDownload the Line 14 info sheet!1.54 MB

Why is transit priority needed on the Line 14?

*Based on 2018 observed run time data

Combined, the completed, funded and proposed Rose Lane projects along the Line 14 could lead to faster trips and help people reach more places:

The projects identified along the Line 14 to date could save riders between 1 and 2.5 minutes if they traveled from end to end during the PM peak. If you ride the Line 14 round trip, five days a week, you could get up to 8 hours of your time back each year!

What could this look like for someone who works in downtown at SW Broadway and SW Main and commutes home to SE Hawthorne at SE 50th at 5 p.m.? This person could save around 2 minutes just from the Rose Lane improvements along that portion of the Line 14 route:

Faster trips mean you can reach more places within a reasonable transit ride. The map below shows the change in number of jobs and places people can access due the Rose Lane projects identified to date along the Line 14. The darker the shading, the more jobs and destinations you can now reach from that starting place in 45 minutes by transit. 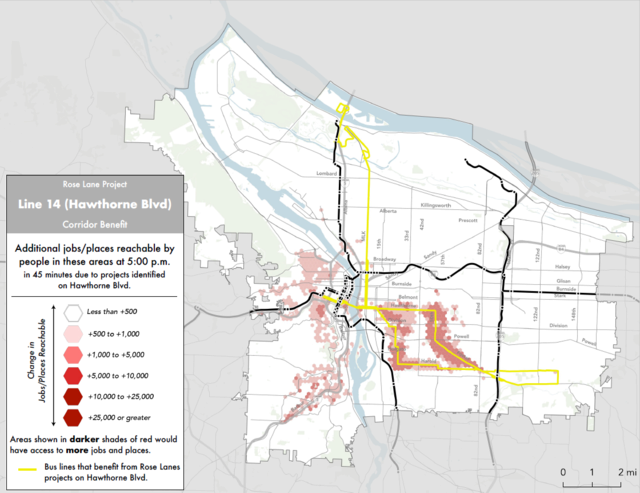 Rose Lane projects along the Line 14

Potential impacts and considerations for other modes

Pedestrian infrastructure and safety – High visibility crosswalks at signalized intersections between SE Grand and 12th avenues will make street crossings safer for pedestrians.
The proposed project at Cesar Chavez would happen in conjunction with other elements of the Hawthorne Pave and Paint, including substantial improvements to pedestrian crossings along the Hawthorne corridor in this vicinity.

Bike facilities – Protected bike lanes will be added to SE Hawthorne Boulevard between SE Grand and SE 12th avenues as part of the funded and in progress project in that location. The Hawthorne Pave and Paint process is evaluating various opportunities to improve access for bicyclists between SE 12th and SE 50th avenues. Bus-bicycle user safety on other projects along this line will be evaluated through a partnership between PBOT and the Kiewit Center for Infrastructure and Transportation Research at Oregon State University. Findings from this study will inform future intersection designs.

Traffic travel time and diversion – Automobile traffic impacts for SE Hawthorne and SE Madison have been evaluated as part of the project from SE Grand to 12th avenues and are within acceptable limits. Project elements include restricting turns at some intersections to prevent cut-through traffic on adjacent streets.

Parking removal – Some parking and loading zones are impacted by these projects. Both projects will remove parking adjacent to intersections and driveways to improve sightlines and safety. In addition, on SE Hawthorne and Madison between SE Grand and SE 12th avenues, parking will be removed to accommodate bus and bike lane improvements.

PBOT will continue to evaluate and monitor for these impacts before and after the project is installed.