The City of Portland Transportation System Plan (TSP) is the long-range plan guiding transportation investments in the City. The TSP is both an implementation tool and a supporting document to Portland's Comprehensive Plan, which contains the transportation element of the City’s Public Facilities Plan, and the List of Significant Projects and Citywide Programs. Portland’s Comprehensive Plan (Comp Plan) is a long-range plan that helps the City prepare for and manage expected population and employment growth, as well as plan for and coordinate major public investments and was first adopted in 1980. Parts of the TSP are components of the Comp Plan and were adopted concurrently. The Comp Plan includes goals and policies whereas the TSP provides greater detail through sub-policies and implementation strategies.

The purpose of the TSP is to guide the maintenance, development, and implementation of Portland’s transportation system, to accommodate 20 years of growth in population and employment, and to implement the plans and regulations of the regional government and the State of Oregon, including Metro’s Regional Transportation Plan (RTP) and the Oregon Transportation Planning Rule (TPR).

Components of the TSP include: 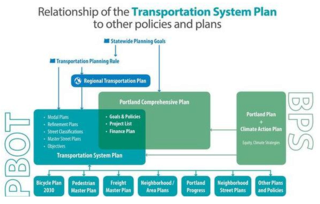 Portland originally developed its TSP in 2002, updated it in 2004 and 2007, and then completed a multi-year update that was adopted by City Council in three-stage between 2016 and 2018. During that time, the TSP was updated both with, and then in accordance to, Portland's Comprehensive Plan update.

In order to keep the TSP current and up-to-date with recent transportation planning and development activities, it is updated at regular intervals. The first two updates in the mid-2000s were not intended to include new policy initiatives. They were primarily technical in nature and included corrections, updates to project descriptions, updates on studies, and inclusion of new master street plans adopted as a part of planning efforts.