Review the history of the Portland Bureau of Transportation's (PBOT) Northwest in Motion Plan, download previous publications, and learn about the various phases that brought PBOT to the final report.
On this page

Major outcomes of Northwest in Motion

The project area includes the inner Northwest neighborhoods bounded by Hwy 30, I-405, Burnside, and the West Hills. Located on the west side of the Willamette River it is within a mile of downtown Portland. The area is home to some of the oldest and most densely populated portions of the city with a diverse mix of single family homes and apartments, commercial, residential, and industrial uses, as well as numerous regionally important religious and community organizations. The heart of the neighborhood is the Alphabet District, a local and national historic area centered around  NW 23rd Avenue, a major shopping and dining destination for the region.

Learn about the six phases of this planning process

In order to plan for the future of the Northwest in Motion study area, we must understand the current land use and transportation context. The Existing Conditions report documents our findings, presenting data on how people are traveling around Northwest, demographics of people in the area, land use zoning, density of housing and jobs, traffic crashes, and transportation networks.

Early in the planning process, the project team recognized that before identifying transportation needs and projects, we had to clarify the roles that different streets are meant to play in the Northwest street grid. Street classifications are the way that plans show which streets should prioritize different modes of travel like walking, biking, transit, or driving. The Bikeway, Traffic, and Transit classifications in Northwest were out of date and in need of refreshing, so Northwest in Motion conducted an extensive analysis and has recommended changes to better meet spacing guidelines for these modes and show why certain streets are more appropriate for bikes while others might be better for people driving or riding transit. 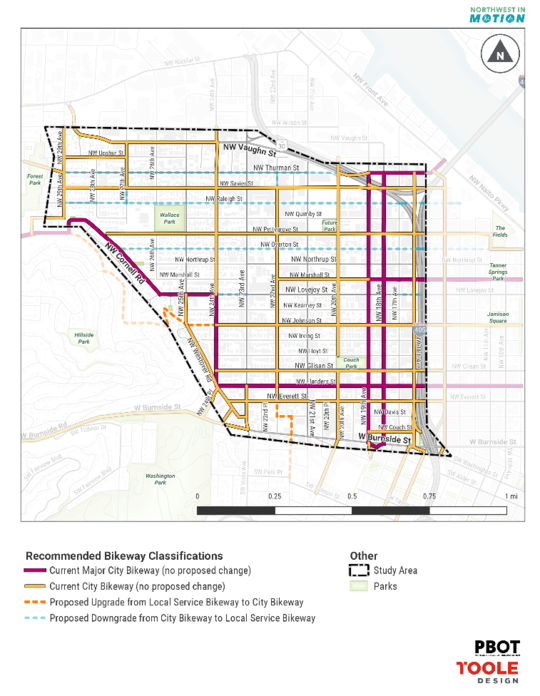 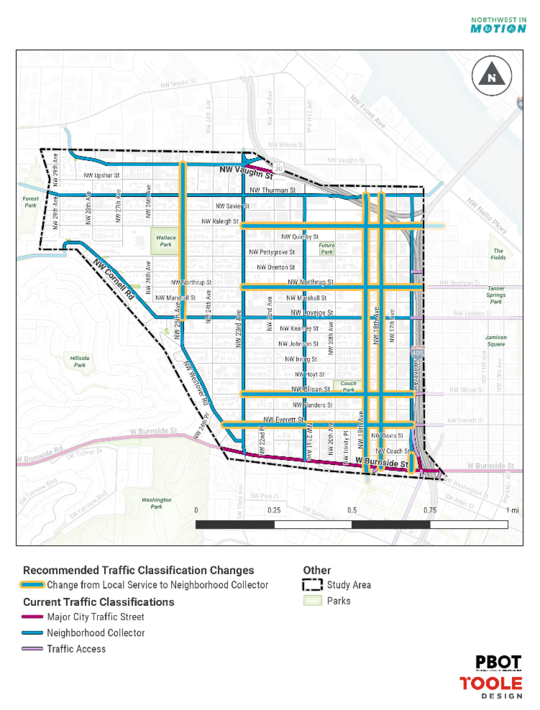 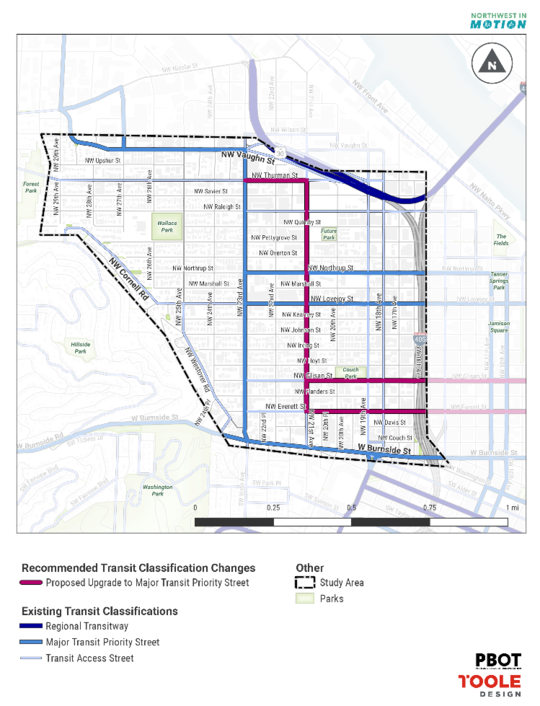 To develop a project list for Northwest in Motion, we needed to use both data-driven analysis and public outreach to assemble a comprehensive needs inventory for the area. We engaged the public through an online comment map as well as in-person events, asking people where they were seeing safety or comfort issues while walking, biking, or using public transit. We also looked at data like where crashes were happening, where transit was getting delayed, and traffic speeds and volumes on neighborhood greenways. This process resulted in a needs inventory of dozens of individual problem spots or corridors. To narrow this down, the team assembled these issues into 20 larger projects falling into three categories: Neighborhood Greenways, Transit Improvements, and Corridor Safety.

Because Northwest in Motion is meant to be a near-term plan that focuses on a small set of projects in the first five years after adoption, we needed to further prioritize the list that emerged from the Needs Inventory. Using City-adopted policies as our guide, we developed set of criteria including safety, equity, demand, and connectivity to help us create three tiers of project priorities. We also considered feasibility factors, such as how likely the project could be funded or completed in the next five years. The 12 Tier 1 projects are the ones that best meet the criteria and have a high chance of near-term implementation, while the Tier 2 and 3 projects will be considered longer-term needs for the area. Tier 1 projects will also be developed in greater detail in the next phase of Northwest in Motion.

In this phase, we have developed design concepts for all twelve of the Tier 1 Northwest in Motion priority projects. Each project has an overview map showing the locations of planned improvements, information about the overall scope of the project, and concept design sketches and renderings showing how the changes could potentially look in the future after full construction. These design concepts are meant to provide a broad overview of the changes anticipated for the project to provide clear expectations, but many of the design details are subject to change during project implementation as we get further into design and more targeted outreach.

PBOT has recently received feedback about the Public Review Draft for Northwest in Motion. We have prepared a summary of the feedback we have received and released a set of proposed revisions to be considered as the recommended draft is prepared. PBOT will be submitting the final recommended plan to City Council for consideration in April 2020.