In 2019, PBOT developed a plan for 82nd Avenue to identify capital improvement projects, policies, design practices, and other recommendations to support the incremental transformation of 82nd Avenue into a civic corridor, as envisioned in the Portland 2035 Comprehensive Plan. 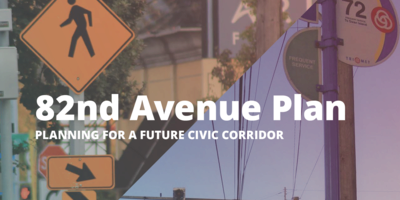 Adopted June 2019
On this Page

May 28, 2021: Joint letter from the Portland Bureau of Transportation (PBOT) and Oregon Department of Transportation (ODOT) to State Senators Betsy Johnson and Elizabeth Steiner Hayward, State Representative Dan Rayfield, and the Joint Committee on Ways and Means:

City Council unanimously adopted the 82nd Avenue Plan on May 23, 2019. View the full plan below, and review Appendix B with maps as a PDF orinteractive map to see estimated public right-of-way dedications property by property along 82nd Ave. Contact the project manager to provide feedback.

See the PBOT staff presentation to council below:

Recommended safety, access and transit improvements along 82nd Ave. The primary focus of these improvements is increasing safety and removing transportation barriers. Most of the recommended projects are enhanced pedestrian and bicycle crossings, increased lighting, signal changes to reduce conflicts, and other minor improvements to existing signals. In addition, enhanced transit priority treatments and bus stop improvements are recommended along 82nd Ave to improve the reliability, speed, and capacity of TriMet bus line 72.

This plan will also serve a larger effort underway, the eventual transfer of ownership of 82nd Avenue (OR 213) from the Oregon Department of Transportation (ODOT) to the City of Portland, under the stewardship of the Portland Bureau of Transportation (PBOT).

This plan was developed in coordination with the 82nd Ave Study: Understanding Barriers to Development, led by the Bureau of Planning and Sustainability. This joint planning effort was funded in part by a Metro Community Planning and Development Grant. BPS and PBOT worked together to address barriers within the corridor. The City’s planning efforts were also coordinated with and informed by the planning process led by the Oregon Department of Transportation (ODOT) to develop the ODOT 82nd Ave of Roses Implementation Plan:

Public open house/community forum -Tuesday, March 5th, 6 – 8 p.m. at Portland Community College – Southeast Campus, 2305 SE 82nd Ave, Community Hall Annex. Come learn more at an open house event. Join your neighbors to discuss the future of 82nd Avenue. Thank you to everyone who attended our 82nd Ave open house on March 5th at the PCC southeast campus. PCC was very accommodating and swiftly helped us get our event rescheduled in advance of our PSC hearing on March 12. Thank you PCC!

You can view the preliminary draft plan and several of the posters displayed at the open house below: