Construction on Foster Road is complete.

We've created a map that highlights the walking, biking, and transit facilities in the area.

With improved crossings and other safety features, modern signals, new pavement, 190 street trees, and new decorative street lights, the project has transformed Foster Road into an inviting thoroughfare that supports a vibrant commercial district and enhances the quality of life in the surrounding neighborhoods. 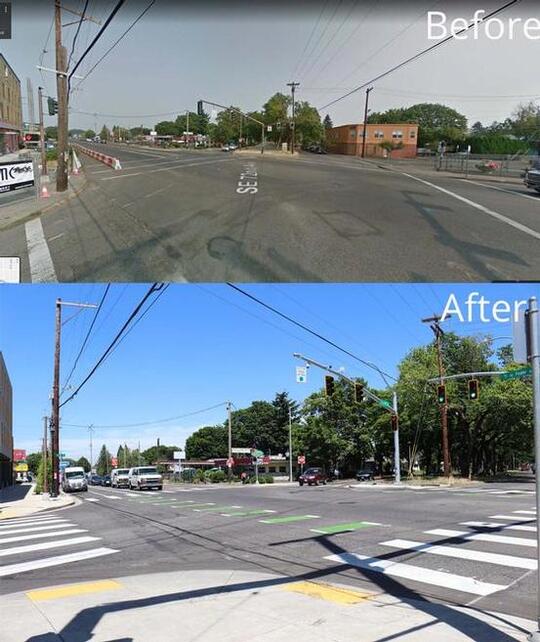 Prosper Portland may be able to provide a loan, grant or technical assistance to qualified businesses and property owners for the purpose of growing your business, improving your place of business or redeveloping your commercial property. Call or email Nixie Stark at Prosper Portland to find out if you are eligible. Nixie Stark (503) 823-0465 StarkN@ProsperPortland.us

Improvements to SE Foster Road have been desired and discussed by the surrounding community for many years. In 2003, the first streetscape improvement plan was adopted by City Council, with the primary intent of improving the safety and appearance of the street. Several elements of that plan were later implemented.

Following those early improvements, Foster Road was identified as a High Crash Corridor and there was a growing concern within the community that more needed to be done to improve safety in the wake of two traffic fatalities. Two new opportunities also arose during this time that led to the 2014 update of the original plan. In terms of funding, Lents Town Center Urban Renewal District boundaries were extended to include Foster Rd to 50th Ave. In terms of design options, there was the growing awareness through local and national experience of how ‘road diets’ can significantly improve safety.  This lead to an update to the 2003 plan that began in 2012. That public involvement process lasted 16 months and culminated in City Council adopted the updated plan in 2014, with all four adjacent neighborhood associations and the Foster Area Business Association endorsing its adoption.

Four travel lane urban roadways tend to high crash rates for several reasons. Foster Road has experienced over 1,200 crashes between 2001 and 2010, making it a High Crash Corridor and among the most dangerous arterial streets in Portland. The most significant design issue currently is the lack of center turn lane. Foster Road has numerous business and residential destinations along its length, which generates numerous left turn movements that currently must wait in one of the through travel lanes before turning left. Vehicles waiting in a through lane are exposed to rear end crashes compared to vehicles waiting in a center turn lane. Currently about 40 percent of the crashes on Foster Road are rear ends.

There are also several important safety benefits associated with reducing the number of through travel lanes in each direction. First, it eliminates the crashes associated with dangerous weaving between travel lanes. Second, it helps reduce speeding during the non-peak hours when the traffic volumes do not justify the need for the second lane. Speed is highly correlated with the severity of traffic accidents. And third, the overall width of the roadway devoted to moving traffic is significantly narrower, making pedestrian crossings both easier and safer.

Overall, experience locally and nationally indicates that the traffic lane changes to Foster Road can reduce the overall crash rate between 20 and 50 percent.

Travel demand modeling was used to estimate the impact to traffic capacity and travel time by going to a three lane cross-section. The model predicts both conditions upon completion of the project and in the year 2035 based on a regional model that projects population and employment growth. Because a single travel lane in each direction can handle the amount of current and future project off-peak travel demand, the impacts to traffic capacity and travel time on Foster Road are largely confined to the peak direction during the AM and PM peak hours.

In the near term, the average peak period/direction travel time for a vehicle traveling the entire length of the project between 50th and 90th Ave is projected to increase by 3 minutes- from 7 to 10 minutes.  From the perspective of the overall duration of the average trip that uses Foster Road, which is 20 minutes, the increase in peak hour travel time is roughly 10 percent.

The travel time difference decreases over time because regardless of the change in travel lanes because of increased growth in overall demand. The difference between the travel time in 2035 compared to the existing roadway configuration and the new one is reduced to about one minute.

Overall, capacity is more of a function of the capacity provided at major intersections rather than the number of lanes in-between. The overall capacity impact on Foster Road is minimized by retaining the existing number of travel lanes at 50th Ave and 82nd Ave intersections.

During the AM and PM peaks, up to 30 percent of the eastbound local traffic on Foster Road between 50th and 82nd Ave is expected to divert to alternative routes. This traffic is not expected to divert to local streets because of the discontinuousness of the local street network surrounding Foster Road. The main routes for diverter traffic are SE Holgate (between 63rd and 82nd Ave), Powell Blvd (between 52nd and 82nd Ave) and SE Woodstock. Eastbound traffic on SE Holgate during the PM peak hour is expected to increase by approximately 250 cars.

The project largely retains the existing supply of on-street parking along Foster Road. Currently, east of 72nd Ave where the curb-to-curb width narrows by 4 ft, there is parking only on one side of the street only during off-peak hours (aka ‘pro-time’ parking).  While this parking is removed by the project, it has low utilization rates because it is not available during the peak hours.