Transportation
In Planning
The Portland Bureau of Transportation (PBOT) is planning to make safety improvements along the three-mile section of SE Stark Street between SE 108th Avenue and SE 162nd Avenue.
Public involvement 2019-2020
On this Page 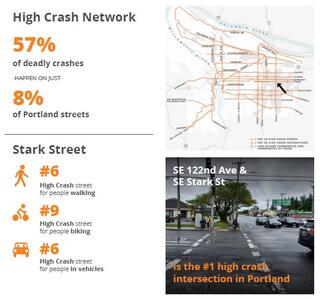 SE Stark Street is currently a difficult and stressful environment to walk, bike, cross the street and get to the bus and does not adequately serve the many people who travel it. 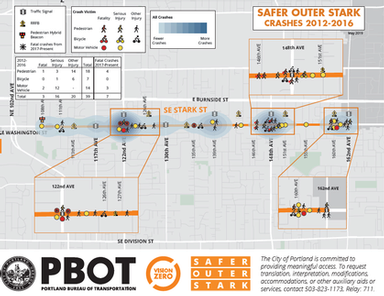 In addition to improving safety for all road users, portions of SE Stark Street will be resurfaced using Build Portland funds. 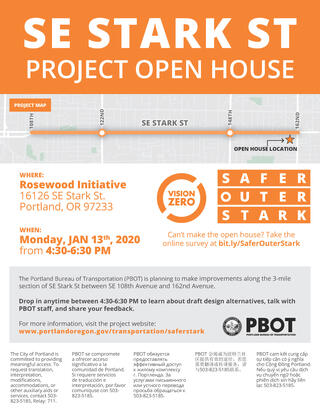 Previous outreach efforts in the area have identified safety as one of the main community concerns. Other concerns and desires for the area include improved lighting, slowing vehicle speeds, improving access to transit, concerns over personal safety, the need for improved sidewalks, and fear that road improvements will lead to displacement.

Thanks to everyone who came out to the open houses in late 2019/early 2020 or took the online survey. View the summary of public involvement activities and open house meeting boards below.

In addition, a comprehensive crash analysis was conducted to better understand the issues along the corridor contributing to the high number of serious and fatal injury crashes.  You can view the summary or full report below.

Funding for the planning, design, and construction of these improvements is coming from taxes resulting from House Bill 2017, development fees, cannabis taxes, and Build Portland funds. The Build Portland funds will pay to repave a portion of SE Stark Street, with the remaining funds dedicated to safer crossing and corridor safety.