Transportation
Completed
This 0.3-mile segment of S Bond Avenue between Marquam Bridge and Tilikum Crossing was completed in 2019. The street was built to support development of the OHSU Schnitzer Campus. Future phases (not funded at this time) will form a north-south couplet with S Moody Avenue through South Waterfront. 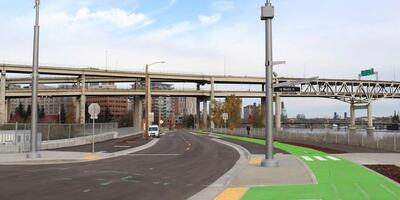 This project is complete. 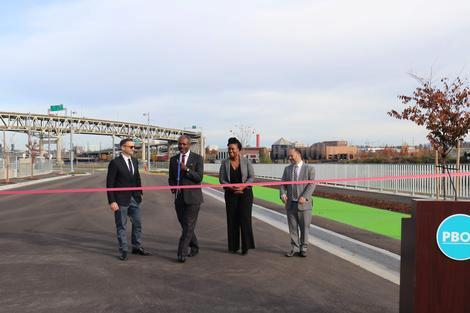 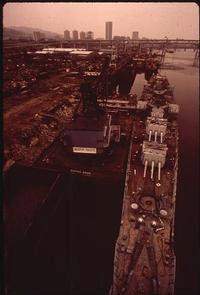 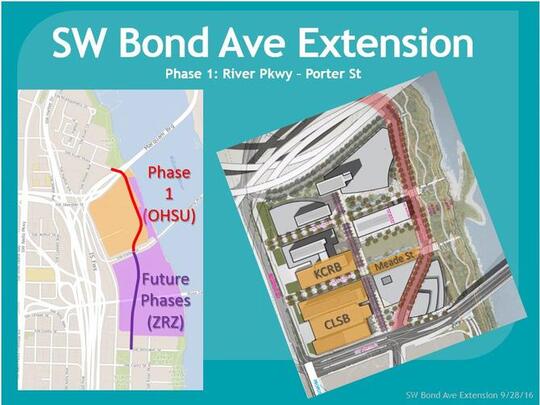 The extension of S Bond Avenue continues over 20 years of planning and infrastructure provision to support redevelopment in the South Waterfront District. The City has been working with property owners, development teams, and other stakeholders to gradually transform this once largely industrial area into a thriving mixed-use community with a range of employment, housing, and retail options along with public amenities such as parks and trails. Realizing the vision for the district requires building a system of streets for people to access places by foot, mobility device, bike, transit, car, truck, and emergency vehicle.

Most of the South Waterfront District south of S Gibbs Street (the base of the Portland Aerial Tram) features an existing street grid built over the past 15 years. From S Gibbs Street northward to the Marquam Bridge, street infrastructure is limited and several large properties are in the planning and development process.

S Bond Avenue is intended to be a major north-south street serving the full length of South Waterfront and connecting it to the rest of the Central City, similar to S Moody Avenue today. Once complete in its entirety, S Bond Avenue will become a “couplet” with S Moody Avenue, with Bond hosting one-way northbound car and bike traffic while Moody handles southbound traffic. The street will be built in multiple phases. Construction of subsequent segments of S Bond Avenue will depend upon the timelines of adjacent development by the Zidell companies. 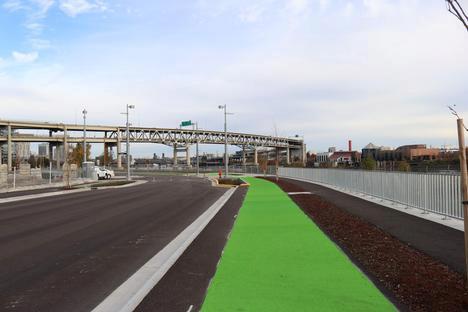 Phase 1 of S Bond Avenue Extension has an “interim design” that includes one motor vehicle travel lane in each direction, a northbound separated bike lane, on-street parking, and temporary asphalt sidewalks. During this interim phase, Bond is open to motor vehicle traffic between S River Parkway and S Meade Street (an east-west street completed by OHSU in 2020). Between future S Meade Street and S Porter Street (Tilikum Crossing), Bond is open to pedestrian and bicycle traffic only.

Eventually, when S Bond Avenue is extended to S Whitaker Street (one block south of the Portand Aerial Tram), S Bond Avenue will be converted to one-way northbound vehicle and bicycle traffic, with southbound traffic served by S Moody Avenue.

Much of S Bond Avenue is elevated and built on retaining walls to match other streets and developments in the area, including the west landing of the Tilikum Crossing.

The S Bond Avenue Extension was a public/private partnership, with public funds coming from the North Macadam Urban Renewal Area administered by Prosper Portland, transportation system development charges (SDCs) administered by PBOT, and an Immediate Opportunity Fund grant from Business Oregon and the Oregon Department of Transportation. Property owners including OHSU and Zidell contributed to the project by performing environmental remediation and dedicating right-of-way.