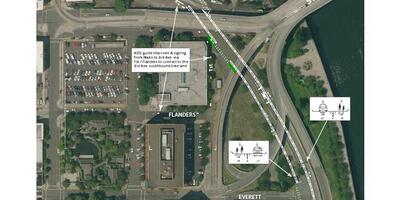 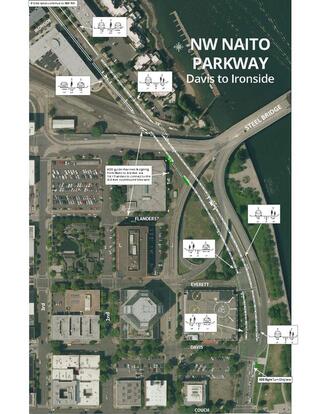 As part of the West Quadrant Plan (adopted in March 2015) and the Bicycle Plan for 2030 (adopted in 2010), a bicycle lane will be added to a portion of NW Naito Parkway between Davis Street and the rail crossing near the Steel Bridge, connecting the existing bike lanes at either end.

This design change will improve pedestrian safety while shortening the street crossing distance for people walking. Existing on-street parking will be unaffected by these changes.

In order to provide sufficient space for bike lanes, the single southbound auto lane will now continue from Ironside Terrace to Davis Street. In the northbound direction, a single auto lane will begin just north of Davis Street. A right turn only lane for motor vehicles to the Steel Bridge will be added.

There has been a longstanding gap in the bike lanes between NW Davis and the north side of the rail crossing (about 1000 feet). Bicyclists must share the lane with fast-moving traffic*, which is an unsafe condition. Also, rail crossings pose a significant hazard to bicyclists, and this design change will considerably improve the angle of the rail crossing (closer to 90 degrees) for bicyclists. This serves as an important connection to the Pearl District and Northwest Portland neighborhoods, and with the new residential development on Naito north of here, there are a considerable number of people bicycling on Naito**.

The recently completed street repaving on Naito from Davis to 9th presented the opportunity to make this change at a reduced cost, since no grinding of existing lane lines is needed. The repaving has provided a “clean slate” to restripe the roadway.

The street crossing distance for people walking is considerably shortened; instead of four motor vehicle lanes to cross, now there will be just two. Also, motor vehicle speeds on this part of Naito were high*. Reducing to one lane will moderate speeds somewhat, closer to the speed limit.

Yes. There will be further improvements to NW Naito and NW Flanders in the future to connect the NW District to the Steel Bridge and Waterfront Park for people walking and bicycling.