Transportation
Completed
This $1.5 million project, funded through grants, has transformed N Williams Avenue to be a safer place for all travelers by addressing the many issues that neighbors, community, and business representatives and PBOT staff identified through a 16-month public involvement process in 2011 and 2012. 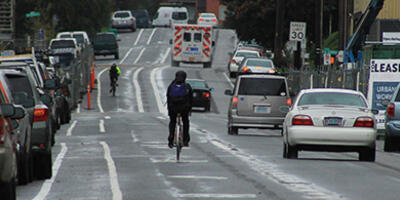 Complete Winter 2014
On this Page

Three years of work have resulted in the redesign of North Williams Avenue, a major street serving a growing neighborhood and the city's busiest bicycle commute corridor. The adjacent Rodney Neighborhood Greenway Project complements the improvements to N Williams and is funded through the same state grant.

Work also included the Honoring History element of the project. North Williams was the historic center of African American life in Portland. A subcommittee made up of original Stakeholder Advisory Committee members worked with the Regional Arts & Culture Council to develop an art project that provides education about the historical change in the surrounding area. Learn more about the Historic Black Williams Project here.

The purpose of this project is to make traveling on North Williams Avenue between Weidler and Killingsworth safer and more comfortable for all users. This project has seven objectives (as amended by the Stakeholder Advisory Committee on December 6, 2011):

A Stakeholder Advisory Committee was convened in February, 2011, to advise the Bureau of Transportation and make recommendations on project design. On April 16, 2011, a public open house to explore options for traffic operations improvements attracted about 125 people. The boards from this event are available online as a "virtual" open house. Comments were accepted through the end of April. A summary of the public comments is available as a PDF in the sidebar to the left.

At the open house and at subsequent meetings of the Stakeholder Advisory Committee, it became clear there were deep community concerns raised by this project, many of which go beyond this project and touch on the history of the district, its historical treatment by government, its changing demographics, and the nature of decision-making. In June, the project team announced that the community process for this project would be extended. A letter from the project manager explaining the decision can be viewed or downloaded from the sidebar. During June and July the project team conducted community meetings to learn more about the community concerns and engage additional stakeholders in the process.

At the August 2011 meeting, the Stakeholder Advisory Committee was expanded to include greater representation from adjacent business owners and long-time neighbors. A membership roster for the expanded committee can be viewed or downloaded from the sidebar to the left, as can all meeting agendas and notes.

A community forum was held on November 28, 2011, and attracted more than 175 people.  Mayor Sam Adams opened the event and introduced three key decision-makers who were there to listen: Tom Miller, Director of the Portland Bureau of Transportation; Susan Anderson, Director of the Portland Bureau of Planning and Sustainability; and Patrick Quinton, Director of the Portland Development Commission. Planning and Sustainability Commissioner Chris Smith was also in attendance. Thanks to a partnership between the City's Intergroup Dialogue, Resolutions North-West, and Uniting to Understand Racism, there were 18 volunteer facilitators available to guide table discussions during the small group exercise.

One young man who attended the North Williams Community Forum on November 28, 2011, hoped he'd have the chance to tell everyone his story, and why safety improvements on North Williams Avenue are important to him. Here's what he wrote, the way he wrote it.

My name is Molly Franks. I am speaking tonight as a dedicated biker, who lives in this neighborhood. I ride my bike on Williams several times a week, all year round, to work, to visit friends, or to run errands. I love living in a city that does so much to promote biking and other environmentally friendly modes of transportation. I also am speaking as a white Portlander who is committed to working for racial justice and equity. For people who are new to this neighborhood, or don’t know its history, it may seem like making a few changes to the lane configurations to increase safety for bikers is a no-brainer. What’s all the fuss about, and why are some people calling it racist? The answer (or part of the answer) is that it’s about a lot more than just some lane changes on Williams.

Racism isn’t just people in white hoods burning crosses, or even white bikers saying racist things about black people in cars. It’s also about ongoing exclusion from city decision-making and lack of civic investment in (and sometimes flat out destruction of) black neighborhoods. Racism is found in discriminatory housing practices that for much of history were perfectly legal. Though they may technically be illegal today, they continue to be widespread (See the Fair Housing Council reports in 2009 and 2011). Housing discrimination (the practice of red-lining) in other parts of Portland concentrated African Americans in this neighborhood. Not coincidentally, the construction of the I-5 freeway, Memorial Coliseum, and Emanual Hospital destroyed hundreds of black-owned homes, churches and businesses. These projects, like improved bike routes, may technically be for everyone. But whom do they benefit most directly, who pays the highest cost, and who makes the decisions? Racism continues to affect this neighborhood, through the process of gentrification, where civic investment has largely benefitted an influx of white residents (like me!), while long term black residents can no longer afford to live here and are being pushed out to “the numbers” – streets far out in east Portland, where neighborhood connections are lost and African Americans often aren’t warmly welcomed.

One way that racism operates is that the people harmed most directly are the ones who see it most clearly. Those of us who benefit often don’t even see it. As a bike advocate, it may be easy to think, that’s history, this is now. But ignoring the pattern is being complicit in exclusion. You may not have been part of the history, but you probably do receive the benefits. And Portland’s African American community continues to pay the costs. There’s clearly a pattern, and the way a small group of white advocates were moving neighborhood changes forward quickly with limited community involvement was in keeping with that pattern. It is completely understandable that black folks are sensitive about more changes in their neighborhood.

There’s been a lot of talk recently in many different circles about “equity.” This is a chance for the city to show with actions that it’s serious about inclusion and racial justice. We can create a process that recognizes the history of institutional racism, that involves communities of color in decision-making, and that more equitably shares the benefits and burdens of civic projects.