Transportation
Under Construction
The Portland Bureau of Transportation (PBOT) is constructing safety improvements for pedestrians and people biking, taking transit, and driving on NE 102nd Ave between NE Weidler and NE Sandy.
Construction of Phase 2 -in Summer 2020
On this Page

Phase 1 of the project is complete. View the January 2020 evaluation of Phase 1 of this safety project:

With the evaluation complete, PBOT is preparing to construct Phase 2 of the project. Planned for construction in summer 2020, Phase 2 will add two new crossings and will build out concrete elements like permanent pedestrian islands, curb extensions, and curb ramps in the project area.

This nearly two-mile corridor is on Portland’s High Crash Network, which means it is one of the top 30 streets for crashes in the city. This corridor is surrounded by homes, businesses, community centers, and schools, including Prescott Elementary School and Mt. Hood Community College. 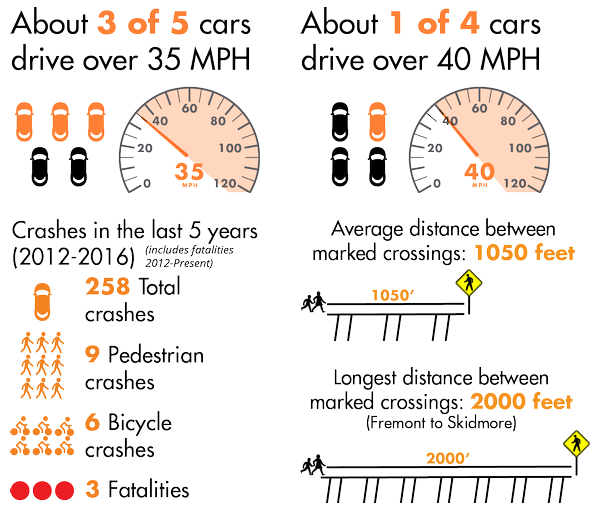 NE 102nd Avenue had five lanes: two vehicle lanes in each direction plus a turning lane and space for parking on both sides of the street. This configuration made crossing difficult for crossings because the entire, five-lane width must be crossed at once. Even crossings at traffic signals prove difficult, as evident by the number of crashes occurring at intersections with traffic signals. PBOT only considers traffic signals or pedestrian hybrid beacons to be safe for crossing five-lane roadways. But these crossings’ effect on traffic flow and high cost prevented PBOT from constructing enough crossings to render 102nd safe for pedestrians.

The alternative: reduce the number of lanes to make a three-lane roadway. Because traffic flow is fairly low on NE 102nd Avenue, removing a lane in each direction wouldn’t contribute to traffic delays and provides space to install buffered bike lanes to the road. And with only three vehicle lanes, PBOT can add safe enhanced crossings with a pedestrian island and signage. Some of the specific advantages include:

PBOT determined the three-lane solution offered the most effective way to improve safety and eliminate pedestrian crashes and traffic-related deaths and injuries.

For the majority of the 1.75 mile corridor, the NE 102nd Ave Safety Project offers a configuration with three vehicle lanes, buffered bike lanes, and on-street parking. Customized modifications were made at key areas to address a variety of issues and opportunities, including at NE Weidler Street, NE Tillamook Street, the overpass over I-84 and the railroad, NE Fremont Street, NE Prescott Street, and NE Sandy Boulevard.

Note: Some minor changes have been made to the design, including moving the NE Sacramento Street crossing about 100 feet south to NE Thompson Street, and maintaining two vehicles lanes southbound on the bridge for a longer stretch. The project team has heard many concerns that the project will lead to increased congestion and diversion onto neighborhood streets. Modelling and engineering studies suggest this is unlikely to happen, except in extraordinary circumstances. To address the concerns, PBOT implemented a pilot project in summer 2019. The pilot allowed people who live in the neighborhood to see how the new roadway functions and respond to what works well and what doesn’t. It also gave PBOT an opportunity to collect data on project impacts.

Phase 1 of the pilot included changing the road striping and installing flexible plastic posts for the segments of two-way protected bike lanes and to mark the pedestrian refuge islands.

PBOT collected data about NE 102nd Avenue and neighborhood streets and conducted a month-long survey in October 2019. The data collected shows an overall improvement in safety measures. Vehicle speeds on NE 102nd Avenue are lower, and the street better meets guidelines for pedestrians and people biking. The data does not show significant changes to travel times for TriMet buses or other vehicles, nor does it show significant changes to volumes or speeds on nearby neighborhood streets. The survey responses included over a thousand comments and suggestions.

With the evaluation complete, PBOT is preparing to complete the project with Phase 2. Coming in summer 2020, Phase 2 will add two new crossings and will build out concrete elements like permanent pedestrian islands, curb extensions, and curb ramps. PBOT is also pursuing funding for other efforts, such as adding lighting along the street and adding a protected left turn at NE Prescott Street.

The project also maintained direct communication with the Parkrose neighborhood association board and the City of Maywood Park council members. The team has also responded to many phone calls, emails, and letters from interested community members.

$331,000 from Fixing our Streets and additional funding from the Cannabis Tax and related projects, including sidewalk infill on NE 102nd Ave from I-84 to Sandy and the Bell and Tillamook Greenway.