Transportation
Completed
During 2015 and 2016, the Bureau will convert the city’s 45,000 street lights to LED (light-emitting diode) lights. 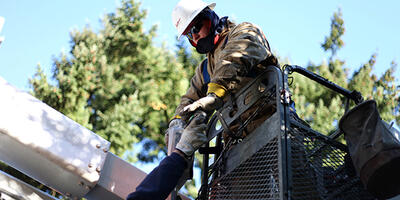 On July 23, 2015, Commissioner Steve Novick announced that the Portland Bureau of Transportation had surpassed two major milestones in the city’s largest-ever energy efficiency project: more than 20,000 city street lights have been converted to modern LED lights, and savings from the program have now topped $100,000 per month. Those monthly savings will continue to grow as more lights are converted. Read the news release for more info about this historic milestone.

Before PBOT began the conversion, the bulk of the city’s streetlights used high-pressure sodium bulbs. Those bulbs only last, on average, five years. The new LEDs are expected to last four times longer and use half the energy.

The City Council unanimously approved the program in December 2012. Energy and maintenance savings will more than cover the initial cost. Once the conversion is complete, Portland expects to save $1.5 million every year.

In terms of energy efficiency, the city expects electrical usage to drop by 20 million kilowatt hours every year and eliminate 10,500 tons of climate-changing carbon pollution.

The new lights will also lead to a reduction in “light pollution,” which will mean clearer night skies for Portland stargazers.

How big is the City’s street light program?

Why are we switching to LEDs?

Cities around the world are switching to LED lights as a way to save both money and energy while simultaneously increasing safety and visibility. These cities include our neighbors to the north in Seattle and nearby in Gresham, Lake Oswego, Hillsboro, Beaverton, Clackamas County and Milwaukie, to name a few.

The LED lights consume about 50 percent less energy when compared to their HPS luminaire predecessors. By converting to LED, the City will save about 20 million kilowatt hours of energy every year. The City’s HPS street lights, most installed in the mid-1980s, are also at the end of their useful lives and need replacement. LEDs will provide better service reliability and lower maintenance costs, as the new LEDs have a lifespan of about 4 times that of an HPS lamp This translates to ongoing savings in maintenance costs. Less maintenance also means fewer service vehicle trips for repairs and thus reduced carbon emissions.

The LED fixtures that are being installed have been designed to provide an improved distribution of light. The LEDs shed light along the roadway, increasing visibility in dark spots between street light poles, rather than solely dumping light directly below street light fixtures as the HPS luminaires did. The LEDs are also designed to reduce the amount of back-lighting that spills behind the street light pole and onto adjacent properties.

How much will this cost us?

Over time the program will actually save money - about $1.5 million a year in maintenance and energy cost savings. But to get the program going, in December 2012, the City Council unanimously passed an ordinance authorizing $18.5 million to the conversion project. Additionally, energy incentives from the Energy Trust of Oregon are being used to help pay for the conversions.

What kind of lights will we have now?

For the conversions in Portland, the City’s specifications are based on recommendations from the Illuminating Engineering Society (IES) and the Municipal Solid State Lighting Consortium (MSSLC), which both provide guidelines and specifications for street lighting. For the cobra-head conversion, we have specified the Leotek ECobra-head fixture, with a 4000 K correlated color temperature (CCT). For the ornamental street lights, we have specified the Amerlux fixture, with a 3000 K CCT.

No, these new lights aren’t any brighter. The current HPS bulbs produce a light that looks almost pink or orange. The new LED lights, however, produce a white light that may be perceived as cooler and brighter to the eye. This allows colors to appear more natural at night, improving color rendering.

The City’s lighting standards are dimmer than national standards because we want to keep light levels manageable for residents. That said, while the fixtures may produce light that seems whiter, measurable light levels on the street have not increased from those produced by the HPS bulbs.

With LED technology, there is also depreciation over time. LED luminaires get dimmer over their lifetime, and don’t burn out all at once like HPS light bulbs. The other factor in street light brightness is dirt, which builds up over time and also lessens light output.

In a June 14, 2016 article, the American Medical Association (AMA) released a statement that included a recommendation of fixtures with a CCT of 3000 K, or lower, for roadway installations due to the undesirable effects of blue lighting. However, the AMA failed to acknowledge that CCT is not the only factor to consider when measuring melanopic output. Factors such as luminaire output, fixture type/distribution, and lighting design are all especially important to take into consideration.

That being said, in response to the AMA article, the MSSLC posted an article that, among other things, indicated that Portland’s lower-wattage LED technology emits about the same amount of blue light as the higher-wattage HPS technology that it replaced. To sum, “in absolute terms, the LED products in Portland have likely had little impact on the melanopic output compared to the previous (and notably non-white) HPS fixtures they replaced, because the reduced light output offsets the LED's higher melanopic multiplier.” If you are interested in learning more about this, the MSSLC article can be found here.

In addition to a blue light output that is approximately equivalent to that of the old HPS fixtures, the LED fixtures that the City of Portland specifies are engineered to better reduce backlighting, or light being wastefully dumped behind the street light poles and into citizens’ homes, something that the old HPS fixtures did not do a good job of. The cobra-head fixtures also have the best ranking – a ‘0’– when it comes to the up-light they produce. That means less light pollution, or sky glow.

The amount of blue light that a person is exposed to due to a street light outside of their home is very minimal. This is even more evident when compared to blue light exposure from use of a television, cell phone, tablet, computer, etc. The typical vertical illuminance from a bedroom window facing a street light is </= 0.1 Lux, whereas measurements from a phone or tablet at reading distance are about 15-30 Lux and measurements from a bedside lamp reflecting off a magazine are about 35-350 Lux.