The Portland Bureau of Transportation has multiple roadway projects going into construction in East Portland in Summer 2022. These projects will improve safety for pedestrians, transit riders, bicyclists, and motorist, as well as improving access to employment centers and schools. Improvements include safer crossings, sidewalk infill, bikeway facilities, and transit improvements at bus stops. These projects have incorporated safety and traffic analysis findings from the East Portland Arterial Streets Strategy report and guidance from The Vision Zero program. 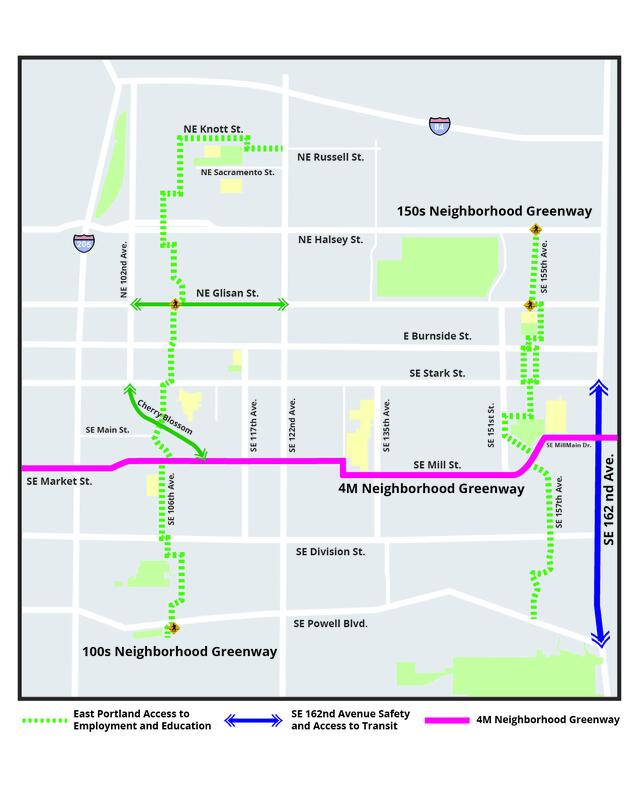 This project will construct safety improvements in multiple neighborhoods of East Portland. The project includes sidewalk infill, new bike lanes, neighborhood greenways and transit safety, comfort, and access improvements. Together, these improvements will enhance access to major employment hubs and business districts as well as  improve pedestrian/bicycle access to eight public schools. Transit access improvements will help residents connect to more distant employment and education centers. Construction has already begun on this project and is projected to be complete this summer.

This greenway is named after the four streets it runs along: SE Market, Mill, Millmain, and Main streets. This new 4.1-mile stretch, between 130th and 174th avenues, adds another way for pedestrians and people biking to travel east-west in our greenway network. PBOT will improve additional parts of the 4M Neighborhood Greenway, between 92nd and 174th Avenues, as a part of the East Portland Access to Employment & Education project. The greenway runs parallel to SE Stark and Division streets, both high-traffic corridors. It helps people connect to neighborhoods, parks, transit, as well as schools like David Douglas. PBOT will also build new sidewalks in places they’re missing now. This project is part of a larger Neighborhood Greenways initiative to connect neighborhoods, schools, parks, jobs, commercial centers, transit, and other destinations throughout Portland. Project elements include bike lanes and pavement markings, street lighting, wayfinding signs, speed bumps, sidewalk infill and tree planting. The project will go into construction this summer with some on-street parking removal that will be necessary to accommodate this new design.

PBOT is improving safety for all pedestrians, people taking transit, and people biking and driving on SE 162nd Avenue between Stark Street and Powell Boulevard. PBOT will repurpose two of the four vehicle travel lanes to slow speeds and make safer crossings and bike lanes. As part of this project, PBOT will also add more sidewalks and street lighting, then repave SE 162nd Avenue between Division Street and Powell Boulevard. The project will go into construction this summer with some on-street parking removal that will be necessary to accommodate this new design.

Other Projects in East Portland

A number of additional projects are in design or construction in East Portland. The links under "Related Projects" is a great way to learn more and ways to connect with PBOT on specific project's within your area.