Transportation
Under Construction
The Portland Bureau of Transportation (PBOT) is updating the street design of NE Glisan Street from NE 102nd to 162nd avenues. This project modifies how space is allocated on NE Glisan to create new safe places to cross the street, new biking facilities, and other elements. 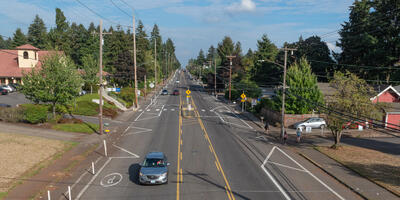 Construction in phases Spring 2018 to Fall 2022
On this Page

This project is being constructed in three phases.

East Portlanders are at greater risk of injury or death in a traffic crash and disproportionately represented in the city’s crash statistics. A person walking in east Portland is 2.3 times more likely to be hit by a motor vehicle than a person walking in inner Portland.

The area’s wide streets have historically prioritized motor vehicle speed above everything else, including safety.

In order to address the parts of NE Glisan with the highest need, PBOT is installing a three-lane street configuration between 105th-119th, 125th-145th, and 150th-160th.

PBOT is not changing the existing number of lanes within three blocks of the 102nd and 122nd intersections, thereby keeping a left-turn lane and two through-lanes on the intersection approaches.

As part of the reconfiguration, bike lanes will be installed from NE 102nd Avenue to NE 162nd Avenue.

The project is divided into three phases:

Why is the City updating the street design on outer Glisan?

In short, because too many people are dying on NE Glisan Street. As a Vision Zero city, Portland has committed to eliminating all traffic deaths and serious injuries. Streets like Glisan have outdated designs that prioritize motor vehicle speed over safety and the result is that Glisan is the fourth most dangerous street for people in motor vehicles.

What is the crash rate on NE Glisan between I-205 & City limits?

It is the fourth most dangerous street for people driving, with 41 out of 46 total serious injuries on the corridor occurring to people in motor vehicles. Two of the people who suffered serious injuries were bicycling and three were walking.

View our Vision Zero crash map to see a map of serious injuries and fatalities on Portland streets.

Will motor vehicle travel times be affected? If so, how?

Yes, it is possible that motor vehicle travel times will be affected. We expect the impact to be limited only to peak travel times and generally not more than 90 seconds compared to 2018 travel times. We are also exploring opportunities to optimize traffic signals along NE Glisan.

Will travel times for people walking and bicycling be affected? If so, how?

We expect traveling by foot and bicycle will become more comfortable. Neighbors can also expect to be able to cross the street faster than they otherwise would because there will be fewer lanes to cross and more marked crossing opportunities.

Will parking be affected? If so, how?

Between 122nd and 162nd Avenues, on-street parking has been moved to a position between the vehicle lane and bike lane, resulting in "parking-protected bike lanes." Parking is set back from intersections and driveways to improve sight lines. Between 102nd and 122nd Avenues, most on-street parking will be removed and replaced with bike lanes, except for a few pocket spaces between 108th and 117th Avenues. Utilization of on-street parking on NE Glisan Street is generally low.

Will the speed limit on NE Glisan Street be changed?

Where is the funding for this project coming from?

Like most projects initiated by PBOT, funding comes from a variety of sources. Funding for this project comes from a grant from the Federal Highway Administration. PBOT applied for this grant partly because East Portland residents prioritized and articulated their goals through East Portland Action Plan (EPAP).

I heard PBOT was doing a project on Outer Halsey, is this project coordinated with that effort?