Transportation
Upcoming
The Portland Bureau of Transportation (PBOT) will be improving several local streets in the Division-Midway area by paving gravel streets, adding sidewalks or walkways, or a combination. Funding comes from the Local Transportation Infrastructure Charge (LTIC) and other sources.
Construction: Spring-Fall 2023 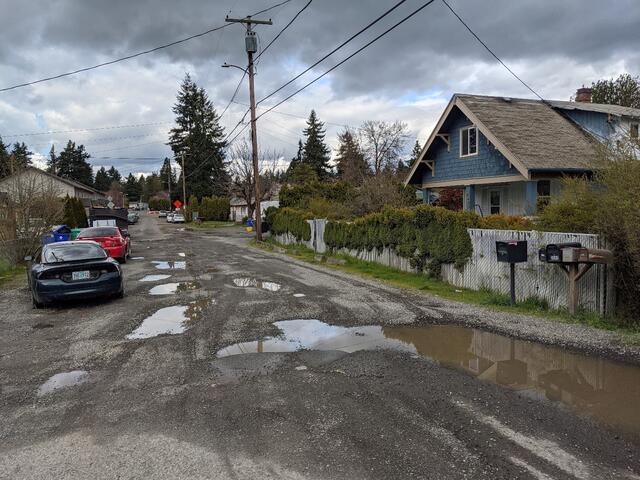 Land surveyors are surveying along the streets that are targeted for improvements. Their data will be used to by the project team to determine the feasibility and cost of different levels of improvements, and to begin the design engineering process.

In 2016 City Council adopted the Local Transportation Infrastructure Charge (LTIC), a fee that developers pay along unimproved streets in single-family zoning areas as an alternative to constructing sidewalks. Council then directed PBOT staff to develop an investment strategy for these funds. Using a methodology that included equity, effectiveness and efficiency, staff developed and Council adopted a strategy to invest collected LTIC funds in three areas: Cully in northeast Portland, Division-Midway in outer southeast Portland, and the Tryon-Stephens headwaters area in southwest Portland. These three areas had high needs in terms of unimproved streets that serve as important routes to neighborhood destinations, and underserved populations including high proportions of people of color, people with lower incomes, and people that rent their homes. The three areas also had neighborhood street plans adopted by City Council, identifying locations for investment.

In the Division-Midway area, which includes portions of the Powellhurst-Gilbert and Mill Park neighborhoods, the goal of the project is to strategically improve a subset of streets that lead to important destinations such as parks, schools, and transit, particularly in areas with lower incomes. Several of these streets, such as SE 130th Avenue and SE 117th Avenue, see more traffic than a typical local street and will need separated sidewalks. Other streets in the area have a gravel surface and will be paved with asphalt.

Construction: Spring-Fall 2023 (some elements may be constructed earlier)

The streets targeted for investment in this project are shown below. Blue indicates segments funded by LTIC; green indicates segments that are not LTIC-eligible and are funded by other sources. These streets were chosen based on equity (prevalence of lower incomes, people of color, and renters); and effectiveness (routes that lead to neighborhood destinations such as parks, schools and transit). The types of improvements have not been finalized, and the overall project scope is not finalized. A public engagement process will begin in 2021 to discuss details on each street.

Most project funding comes from LTIC as described above. Other funding on the project includes: