Transportation
Under Construction
The Portland Bureau of Transportation is constructing the Blumenauer Bridge (originally called Sullivan's Crossing) to serve as a vital connection for pedestrians and people biking between two of Portland’s fastest growing neighborhoods—Lloyd and the Central Eastside—and beyond. 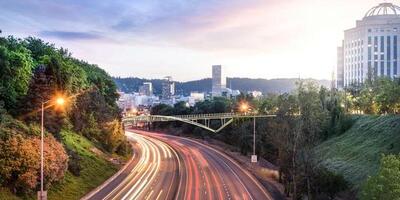 You're invited to a community celebration of Portland's newest car-free bridge! Join us for pop-up block parties on nearby streets, design tours, pedestrian and bike parades, and meet local vendors and community organizations all gathering to celebrate the Congressman Earl Blumenauer Bicycle and Pedestrian Bridge's opening day on July 31, 2022!

Visit our event page for all the details:

The Blumenauer Bridge will serve as a vital connection for pedestrians and people biking between two of Portland’s fastest growing neighborhoods—Lloyd and the Central Eastside—and beyond. In the future it will also serve as an important link in Portland’s Green Loop.

This new bridge will be 475-feet long and 24-feet wide, spanning over seven lanes of I-84 traffic, two active railroad lines, and Sullivan’s Gulch. The completed bridge will have a 10-foot wide pedestrian path and a 14-foot wide path for two-way bicycle traffic.

The bridge will be seismically resilient and serve as a backup route for emergency vehicles over I-84 in the event of an earthquake. In addition to the bridge, the project includes two new public plazas and landings on the north and south sides of the bridge.

The bridge will be located along the NE 7th Avenue alignment to best serve the geographic centers of both districts, link to existing and planned bike routes, and reduce conflicts with truck traffic. The nearest existing connections, on NE Grand Avenue and NE 12th Avenue, are substandard for pedestrian and bicycle use and have significant conflicts with freight and automobile traffic.

This bridge is being constructed by HP Civil Inc., an Oregon-based construction company. Watch the video below to learn how it was fabricated!

Originally called “Sullivan’s Crossing” during its design and development, the bridge was officially named the Congressman Earl Blumenauer Bicycle and Pedestrian Bridge in May 2019 to honor the congressman’s steadfast, decades-long advocacy for cycling and pedestrian issues in Portland and across the country.

The estimated total cost is $19 million. Funding for the project comes from the Oregon Convention Center Urban Renewal Area and from Transportation System Development Charges (TSDCs), which are fees paid by development to mitigate the impact of new users of the transportation system.

Other funding sources include a commitment from the nonprofit transportation management association Go Lloyd and the Central Eastside Industrial Council.

About Portland's Central City and the CC2035 Plan
What are Neighborhood Greenways?
About the Green Loop

The Blumenauer Bridge is open to the public