Transportation
Completed
This project will let people know they are on a street prioritized for use by cyclists and, by association, other non-motorized users. We want to make people aware of this by using design and art features to communicate this message to cyclists, pedestrians, and motor vehicle drivers. 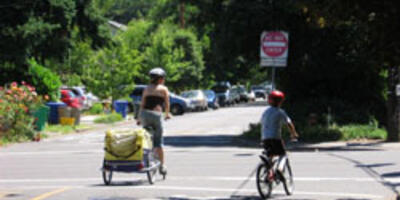 Complete Spring 2011
On this Page

Clinton Street is one of Portland’s oldest and most well-established bicycle boulevards. It sees some of the highest bicycle use of any bike boulevard in the city - around 1,800 bikes per day along many sections. It already has a comprehensive range of traffic calming tools in place including speed bumps, traffic circles, a bike box, a semi-diverter, and pedestrian crosswalks. However, despite the presence of these traffic calming tools, Clinton Street still sees higher cut-through auto-traffic than most other bicycle boulevards or neighborhood greenways in the city - between 2,000 and 2,400 vehicles per day along many stretches. Bicyclists often say they feel squeezed and uncomfortable with the high volume of auto traffic along the boulevard. 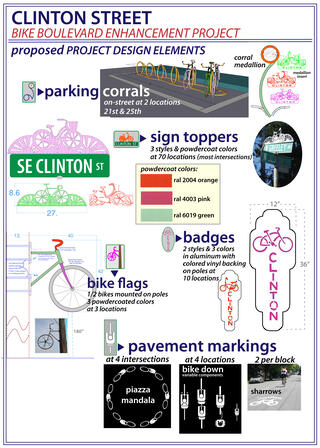 The objective is not simply to create and implement art for art’s sake, or to be solely aesthetic in nature. Rather, it is to use art as a strong communicative project tool to clarify the street’s designation. The project intends to strongly communicate the important safety message “This is a bicycle boulevard/ neighborhood greenway” to all users of the street. All artistic components developed should be capable of communicating this message clearly to everybody traveling along the street.

PBOT envisages potentially using a mix of on-street pavement markings, signage, & other potential artistic means. All creative content developed for the project will need to be bold, creative and striking. It will also need to be simple, comprehensible, straightforward to install and maintain, and not so intricate that it cannot be potentially replicable on other bicycle boulevards throughout the city.

The Regional Arts & Culture Council (RACC) has allocated $10,000 from their “Art on the Streets” funds. This funding is to be used exclusively to fund the selected artist’s project time. PBOT has allocated up to $20,000 for initial installation of project elements.