Transportation
Completed
The buffered bicycle lane design provides a more protected and comfortable space for cyclists than a conventional bike lane without the same sight line barriers as a cycle track, where parked cars may obstruct a view of cyclists. 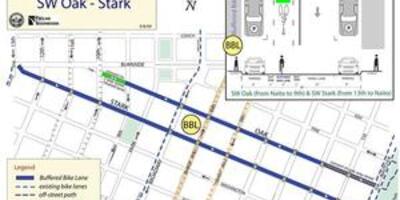 Buffered bike lanes are being installed at the same time as the cycle track for the PBOT study to assess which facility is more comfortable for cyclists and what impacts the facility has to traffic patterns, congestion, usage, and the commercial environment.

SW Stark and Oak were chosen to connect with Waterfront Park and are in the proximity of other major bicycle commuting routes. Additionally, by maintaining parking and reducing one travel lane, the environment will not only be comfortable for bicyclists but will also provide a calmer, more inviting pedestrian environment for retailers. 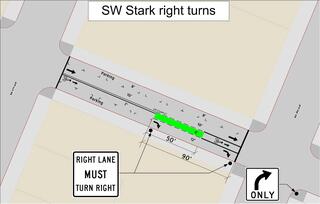 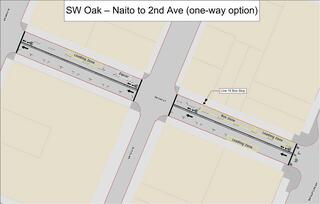 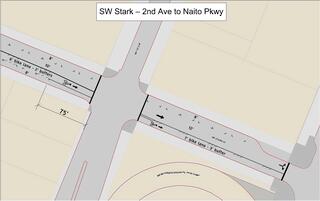 City crews are installing buffered bike lanes on SE Holgate between SE 122nd Avenue and the new I-205 MAX station near SE 92nd Avenue before the end of August 2009.

In order to install these bike lanes, this section of Holgate will be converted to three motor vehicle lanes from its current configuration of five lanes. One motor vehicle travel lane in each direction will be replaced by a seven-foot wide bicycle lane with an additional painted three-foot buffer on the traffic side.

Buffered lanes reduce the risk posed by car doors on the parking lane side and provide additional space between cyclists and motorists. This bike lane will improve connectivity for cyclists with the I-205 bike and pedestrian path, as well as with the new I-205 MAX station

The project is funded by a “Jobs Access and Reverse Commute” (JARC) grant administered by TriMet; JARC funds aim to increase connections to jobs and employment centers in the region.

What is a buffered bicycle lane?

A buffered bicycle lane is designed so that it provides a more protected and comfortable space for cyclists than a conventional bike lane and does not have the same barriers to sight lines as a Cycle Track – where view of cyclists may be obstructed by parked cars.

Why are we constructing buffered bicycle lanes (i.e., what’s wrong with these streets the way they are now)?

These streets currently work fine for people who are comfortable riding bicycles in mixed traffic. However, our designs are intended to make bicycling more comfortable for the majority of Portlanders who are not comfortable riding under such conditions. Our analysis indicates that most Portlanders would use a bicycle much more often than they currently do if they didn’t have to mix so much with automobiles. A buffered bicycle lane provides that opportunity.

Why not use a simple bicycle lane?

Because the buffered bicycle lane, with the added shy zones, offers a more comfortable riding environment that we believe it is more consistent with our efforts to make bicycling a part of daily life in Portland.

How does an buffered bike lane provide more protection for cyclists than a bike lane?

Buffered bike lanes provide more protection for cyclists by providing ‘shy’ or buffered zones on either side of the cyclist.

What will drivers notice that is different about driving on a street with an buffered bike lane?

There isn’t much of a change for drivers.  They will still need to watch carefully for cyclists when they are turning right at cross-streets or driveways.  They will also need to take care when parking on-street which is accomplished by crossing the enhanced bicycle lane.  Cyclists will always be clearly visible to drivers because, unlike a Cycle Track, the buffered bicycle lane does not have the barrier of parked cars between the bicycle lane and the travel lane.

The travel way for vehicles will also be narrower.  On SW Stark and SW Oak, the number of travel lanes will be reduced from two to one.

Will SW Stark and Oak Streets become congested if there is only one travel lane for vehicles?

Our traffic analysis indicates that these streets will operate with little additional delay for cars when reduced to one travel lane.  One of the reasons that these streets were selected for this demonstration project is because they have light traffic flows and extra street capacity available for other users.

How does parking work adjacent to an enhanced Bicycle Lane?

The Buffered Bicycle Lane proposed for this demonstration project eliminates a travel lane so no construction is needed.  As a consequence, they are low cost and relatively easy to implement.

Do buffered Bicycle Lanes provide any benefit for retail businesses on the street?

The reduction of one travel lane can provide a calmer environment for retail businesses without reducing area parking.  Additionally, this improvement will attract more cyclists to the street and more people will use the street in total.  This will likely be a benefit to businesses that attract passer-by shoppers.

When will the buffered bicycle lane be built?