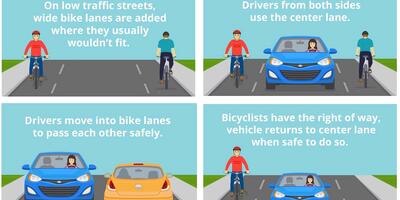 Advisory shoulders and bike lanes are complete for the 2022 construction season. The easternmost section of NE San Rafael Street will not have advisory lanes installed until further evaluation takes place.

Advisory shoulders and bike lanes have been installed in three locations in Portland in summer and fall, 2022:

Submit your email address here to receive updates about this project

How do advisory shoulders and bike lanes work?

PBOT will monitor and evaluate the advisory bike lanes after installation. The installation uses low-cost, non-permanent materials to allow for modifications as needed.

Why advisory shoulders and bike lanes?

What do we know about advisory shoulders and bike lane safety?

What qualifies as a "low traffic street" for advisory shoulders or bike lanes?

Federal Highway Administration guidance recommends streets that average less than 4,000 vehicles per day. PBOT's constructed or proposed advisory shoulder and bike lane project streets all operate with less than 4,000 vehicles per day, with most in the 1,500 to 3,000 average daily traffic range. The last 10 years of collected traffic data is available on our publicly accessible webmap.

What traffic studies have you done on the existing or proposed projects?

Each project will have before and after traffic impact analysis completed. Those studies include collecting and interpreting vehicle speeds and volume data, evaluating crashes and crash risk, and conducting transportation network analysis for potential benefits and issues that could arise.

For example, PBOT has conducted 81 traffic counts (and 34 since 2015) on NE San Rafael Street between NE 111th and NE 148th Avenues. Depending on the street's operating conditions and the length of the proposed project, the number of traffic studies will vary.

Will advisory lanes or shoulders lead to more crashes?

Why build advisory lanes or shoulders where there are few people biking?

Portland city goals call for creating conditions that encourage and allow for increased pedestrian, bicycle, and transit use as alternatives to driving. PBOT experience has been that creating good conditions for biking results in more biking and less driving. PBOT understands that not everybody is going to ride a bike. Even those who do ride bikes don't do so for every trip. All of our advisory shoulder or bike lane designs continue to accommodate two-way traffic for automobiles. These projects improve mobility for more people and modes of traffic.

PBOT's goals are to build to sidewalks and better bike lanes on many miles of city streets. However, many of those streets require significant financial investments to build new sidewalks or protected bike lanes. In the meantime, advisory lanes and shoulders can provide increased mobility and better spaces for walking, biking, and rolling.

What if two cars collide, who will be at fault?

Traffic is expected to yield to oncoming traffic, This website has more information from the Oregon Revised Statutes (oregon.public.law/statutes/ors_811.300). If you have specific questions around the law, it is best to contact legal consultants.

ORS 811.300 addresses the need for drivers to move right for oncoming traffic. The duty of care that all drivers must take in ensuring that there are not cyclists in the bike lane before entering into that bike lane, assuming they needed to avoid oncoming vehicular traffic, would also apply. These are concomitant duties; they are not necessarily exclusive of one another. This specific design is consistent with advisory bike lane design in the US, Canada, and other parts of the world, and approved by the Federal Highway Administration. PBOT has no indication that the design will increase the risk of crashes, with published research concluding it typically reduces crash risk. If you have specific questions around the law, it is best to contact legal consultants.

PBOT understands that the links above are not screen reader accessible and we are working towards a permanent solution.  Due to the complexity of the information the map provides and the currently available map platforms at the city, we ask for your patience while we work on a technology-based solution.  As we work toward providing that level of accessibility, please contact Scott Cohen at 503-823-5345 to reach PBOT staff who can assist you to get the data you need from the map.   You can also contact PBOT’s ADA Coordinator at Lisa.Strader@portlandoregon.gov or at 503-823-5703. Thank you for your understanding and patience.