Transportation
Engineering And Design
As part of this project, the Portland Bureau of Transportation (PBOT) will make critical pedestrian crossing improvements to 82nd Avenue at seven intersections between NE Klickitat and Lambert streets. 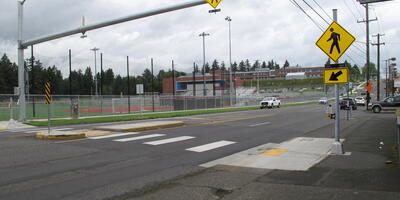 The project team has finalized designs of Klickitat, Schuyler, Clinton, and Schiller crossings. The project will go to bid in winter 2023 and construction will begin in summer 2023.

The project team is preparing preliminary designs for the Ramona, Tolman, and Lambert crossings.

PBOT will be adding features proven to reduce fatal and serious injuries occurring in traffic crashes along 82nd Avenue. In the most recent 5-year period, all 9 fatal crashes and more than half of the 59 serious injury crashes on 82nd Avenue in Portland were either pedestrians or cars turning at locations without signals.

Safe pedestrian crossings and medians are two of the most effective measures to reduce or eliminate these types of crashes. The new pedestrian crossings with tree-lined median islands will provide safe and comfortable places for people to cross 82nd, will reduce the risk of turning crashes, and will help define 82nd Avenue as street serving the community, not just a highway.

As part of this project, the Portland Bureau of Transportation (PBOT) will make critical pedestrian safety improvements to 82nd Avenue between NE Klickitat and SE Lambert Street.

The current crossings will be upgraded to new pedestrian half signals, full signals or pedestrian beacons.

In addition to the signal improvements, PBOT will install accessible curb ramps and high-visibility crosswalks all locations and concrete median islands. Additional details are below.

Sign up for Building a Better 82nd Email Updates

To meet construction deadlines, PBOT will rely on insights from the extensive community engagement the bureau and other agencies conducted over the past 10 years, including:

The City conducted interviews with property owners, business owners, and community members, as well as market research to better understand barriers to redevelopment.

About Building a Better 82nd

Ownership of 82nd Avenue is being transferred from the state to the Portland Bureau of Transportation (PBOT). A critical north-south connection and one of Portland’s high-crash corridors, 82nd Avenue is in urgent need of significant investments to improve safety and address maintenance issues.

PBOT is investing $80 million in 82nd Avenue to deliver critical fixes now. The needed basic safety and maintenance repairs to the corridor include paving, crossings, lighting, safety improvements at intersections, and sidewalk improvements.

After making the most critical repairs, PBOT will invest $105 million in future investments for a better 82nd Avenue. Over the next two years, PBOT will conduct broad and inclusive community engagement and work directly with community-based organizations and agency partners to determine what the bureau should focus on for improving 82nd Avenue long-term.