Transportation
Completed
The 20s Bikeway provides a major new link in Portland’s bikeway network. The 9.1-mile long route spans the length of the city, from the Springwater Corridor in the south to NE Lombard St in the north, connecting many neighborhoods with some of the highest rates of bicycle commuting in the country. 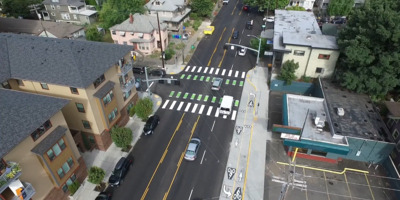 The importance of this route starts with its north-south orientation. Most of the bicycle network is currently oriented in an east-west direction, where it can use a dense and continuous network of local streets. Portland’s north-south street network is more difficult to traverse on bike: the streets are often interrupted by deadends and dogleg routes, and major barriers, such as Interstate 84 and more busy arterial streets, have few places to cross. The 20s Bikeway provides a seamless, low-stress cycling path through these obstacles that serves a broad range of cyclists.

The new route connects a large number of neighborhoods and destinations. More than 35,000 residents, including 5,500 school-aged children, live within a quarter mile of the route. It travels through 13 neighborhoods and six commercial districts and provides access to 14 parks and 12 schools. Along the way, it intersects with 14 existing east-west bikeways and six more that are planned.

To make the route an enjoyable bicycling experience for people of all ages and abilities, the project used a broad range of roadway improvements to ensure safety and convenience for the public. It improved 17 busy arterial street crossings with benefits for people walking and biking. More than two-thirds of the route uses low-traffic volume and low-traffic speed residential streets that have been calmed to the latest Portland standards for neighborhood greenways. The other third of the route uses neighborhood collector streets that have been upgraded with bike lanes, most with buffered bike lanes and several segments with protected bike lanes.

After: A marked crosswalk with a new beacon indicates where people walking and biking should cross East Burnside. Green paint shows where bikes cross, and a two-way bike lane along Burnside shows how people biking continue on the south side of the street.

After: A larger island provides ADA ramps, and a tree-lined route for people walking. A green jug-handle built into the island provides a clear, comfortable route for novice bicyclists to turn east to reach the neighborhood greenway route at NE 30th Ave. Speed humps and a 20 mph speed limit make 28th Ave. safer and more accessible.

Before: People walking and biking across SE Powell Blvd had an unmarked crosswalk to cross a high-speed, high-traffic state highway. They walked or biked in the turn lane, or on the island with no ADA ramps.

After: A new, marked crosswalk provides safer access for crossing. People walking across Powell can activate a push-button signal to stop vehicle traffic and cross the street with an ADA accessible median island. People biking wait in the green lane, where a sensor tells the traffic signal to turn on a green light so the bicyclist can pass through the median island. Car traffic is forced to turn right onto Powell.

See more before and after photos on our FLICKR page.

Design and construction of the project was funded through a $2.1 million grant from Metro. The grant was administered by the Oregon Department of Transportation. In addition, it was funded by $2.4 million of Transportation System Development Charges, which are one-time fees paid by new development to help fund the cost of capital improvements to serve a growing population.