Orders are coming in fast, encouraging drivers to go slow!

Blog Post
The Portland Bureau of Transportation (PBOT) is releasing new neighborhood greenway signs. With silhouetted figures biking, walking their dog, and playing pick-up soccer, the cheery green and white signs serve as a valuable reminder to people driving by to slow down and look out for other people on
Published
January 20, 2023 1:22 pm
Updated
January 20, 2023 1:39 pm

(Jan 20, 2023) Back by popular demand, the Portland Bureau of Transportation (PBOT) is releasing new neighborhood greenway signs. With silhouetted figures biking, walking their dog, and playing pick-up soccer, the cheery green and white signs serve as a valuable reminder to people driving by to slow down and look out for other people on the street. 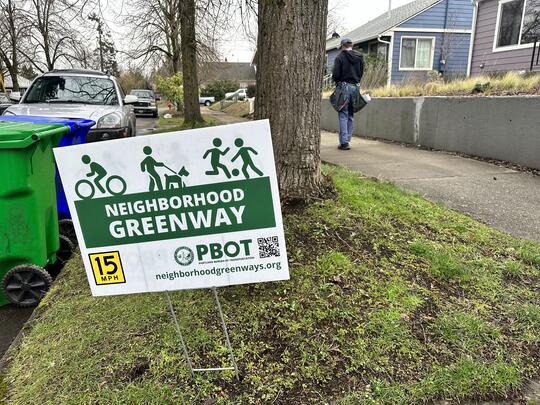 Not sure if you live on a greenway? Put your address into the Portland by Cycle Online Map and check to see if you are on the neighborhood greenway network.

2022 was a big year for Neighborhood Greenways, more improvements coming in 2023.

In 2022, PBOT worked to further strengthen our Neighborhood Greenway network by making improvements, big and small, to stretches of greenways all over Portland. Some highlights include:

The 100s Neighborhood Greenway: PBOT completed work on a five-mile Neighborhood Greenway that connects Portlanders to job centers and shopping districts. The new route provides a low-stress path from Ed Benedict Park in Southeast to the Gateway Transit Center in Northeast. 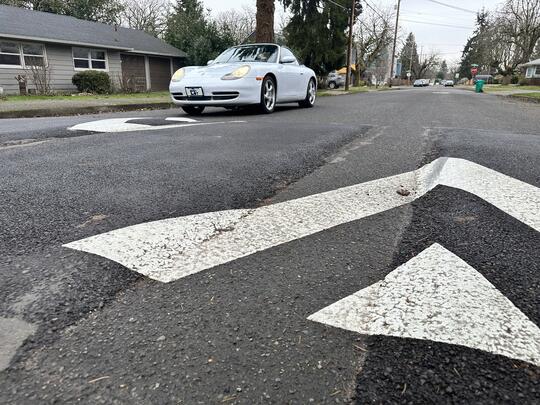 Small changes to NW Johnson Street bring big bike improvements: PBOT completed planned improvements to the NW Johnson and NW Marshall Neighborhood Greenway last year. The project deployed a mix of traffic diverters and speed bumps to cut down on the rate of cars speeding through the corridor. PBOT made improvements to a handful of intersections, with the aim of improving sightlines so all road users could more easily see cross-traffic moving through the area.

PBOT will finish the 4M Neighborhood Greenway in East Portland, building sidewalks and improving biking infrastructure along the route. The neighborhood greenway will stretch from SE 82nd Avenue to 174th Avenue, near the Portland-Gresham border. Once completed, the low-stress route will provide easier and safer connections for people looking to access businesses along the SE Stark and SE Division corridors.

It'll be a groovy ride! Construction starts soon on the 70s Neighborhood Greenway in 2023. In the spring, PBOT will begin construction on a vital connection, providing an efficient path for people walking and rolling to get from Rose City Park in Northeast Portland to the Brentwood-Darlington neighborhood in Southeast Portland. PBOT will build 7-foot sidewalks along portions of the neighborhood greenway. Additionally, PBOT will add safer crossings as the neighborhood greenway intersects with arterial streets such as NE Halsey Street, SE Foster Boulevard, and SE Duke Street.

Neighborhood greenways: A low-stress way to roll and walk across Portland.

These neighborhood streets provide the backbone of the city’s Safer Routes to School network, helping connect neighborhoods, parks, schools, and business districts. Regardless of the weather, our neighborhood greenways shine by providing valuable low-stress connections for Portlanders of all ages getting to school, work, or running an errand. Neighborhood greenways are showcased as vital corridors connecting communities during PBOT’s Sunday Parkways events.