Federal funding will help create permanent plazas downtown, including a segment of the future Green Loop

Press Release
The U.S. Department of Commerce has announced that the Portland Bureau of Transportation (PBOT) will receive a $1.2 million federal grant to create 32,000 square feet of street plazas to promote tourism and the economic recovery of downtown.
Published
September 30, 2022 2:55 pm
Updated
September 30, 2022 3:12 pm 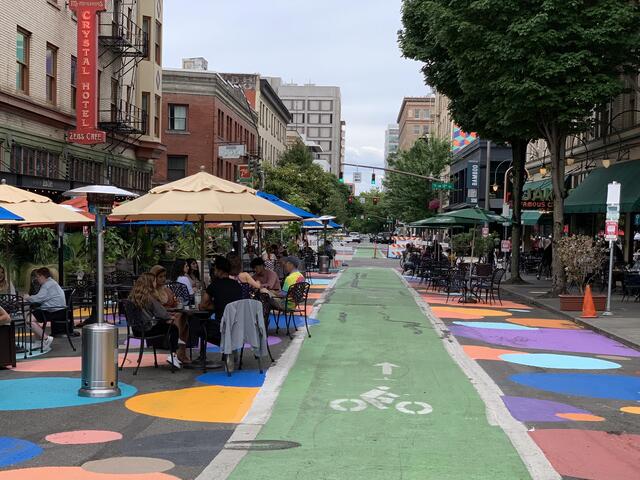 The Pride Plaza at SW 12th Ave and Harvey Milk Street is an example of a Portland Public Street Plaza that provides outdoor gathering space, with restaurants operating outdoors. Thanks to a federal grant, the plaza will have permanent improvements next year. Photo by Iain MacKenzie.

The grant from the U.S. Economic Development Administration, part of the U.S. Department of Commerce, is funded by the American Rescue Plan.

The federal investment will make permanent improvements for Pride Plaza, at SW 12th and Harvey Milk Street, where a temporary plaza was created during the pandemic to create safe space for community gatherings, business use and public art.

"During this pandemic, we learned how important it is to use our outdoor public space for community members to come together," Hardesty said. "We are so grateful to the Biden Administration and our Congressional delegation members for this federal support. Last year, I directed PBOT to make our street plazas and outdoor dining programs permanent. Plazas like these downtown will help us make Portland a more inclusive, equitable place, and help grow our small businesses and cultural destinations."

Planning and community involvement in the design of the Harvey Milk Plaza improvements will start in early 2023, with construction by the fall.

The plaza connection to the Cart Blocks will build a segment of the future Green Loop, a concept for a 6-mile linear park with leafy green canopy, urban pedestrian plazas and engaged adjacent development that unites Portland's Central City neighborhoods. Construction will happen soonest near the food cart pods, and in subsequent years on the other sections. Sections adjacent to O' Bryant Square Park will be coordinated with the redevelopment of the park, which is closed due to structural issues with an underground parking garage.

For more information on the funding, see the press release issued this week from the Economic Development Administration. To learn more about Portland Public Street Plazas, including Pride Plaza, see the PBOT website. 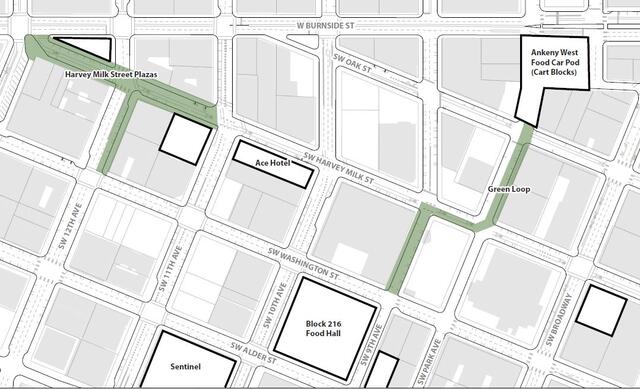 This map shows the approximate locations of plazas that will benefit from federal funding. The Harvey Milk Plaza goes from West Burnside to SW 11th Avenue. The segment of the Green Loop connects the Cart Blocks at West Burnside and Park Avenue to O'Bryant Square, which is planned for redevelopment. Map by PBOT.