Press Release
The Portland Bureau of Transportation (PBOT) and contractor Raimore Construction have completed all major work on the Outer Division Safety Project, which has built five miles of improvements designed to reduce deaths on one of the most dangerous roads in the city.
Published
September 14, 2022 2:06 pm
Updated
September 14, 2022 2:12 pm 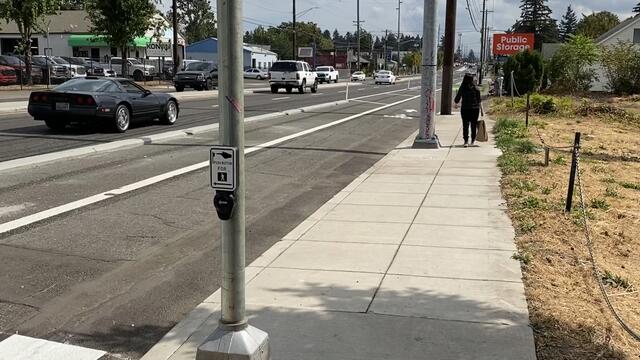 Major safety improvements, including street lighting, new traffic signals, protected bike lanes and more have been installed along SE Division Street between SE 80th to 174th avenues. The $11 million project is the latest investment in one of Portland’s most dangerous corridors in the city where 22 people have died and more than 100 have been seriously injured in the last decade.

Some adjustments to signing, striping and traffic signals will continue into the fall.

SE Division Street is the second most dangerous street for people walking and ranks as the fourth most dangerous for people biking, causing high numbers of deaths and injuries, according to a PBOT analysis of state crash data for 2016 to 2020. It has the sixth highest number of traffic deaths and life-altering injuries for people driving or riding as a passenger in a vehicle of any street in Portland.

The project installed raised center median islands, which are specifically designed to reduce the high rate of crashes that come when people turn left across oncoming traffic.

Transforming roads from high-speed, high-crash corridors to safer streets, using nationally recognized best practices for traffic engineering and design, is a key part of the City of Portland's Vision Zero effort to reduce and eventually eliminate all traffic deaths from Portland.

"East Portland has long suffered from an epidemic of traffic violence, and this project will go a long way towards ending that," Hardesty said. "As we redesign the wide, high-speed roads in East Portland to make them safer for everyone, these changes may make people uncomfortable if they are used to going as fast as they want to, and making high-speed turns everywhere, regardless of the consequences for our neighbors. This project strikes a good compromise by providing places for drivers to turn around to access businesses, while also adding pedestrian crossing beacons, street lighting, protected bike lanes. PBOT's project is timed perfectly for the new TriMet FX™ bus service, which will start this weekend."

“The Division Transit Project, which made way for the new high-capacity TriMet FX™ (Frequent Express) bus service launching on Sept. 18, was always meant to be more than a transit project,” said Sam Desue Jr., TriMet General Manager. “With the generous support of the Federal Transit Administration, TriMet and our project partners were able to leverage federal funds to help transform Division Street from a high-crash corridor into a safer place for all modes of transportation. We have delivered to the community a corridor that is a more livable place to travel, work, do business and call home.”

"Outer Division Safety Project will save lives by taking a road that was dangerous by design and improving it with proven investments that make it safer for everyone, especially our most vulnerable students, workers, and older adults," said Sarah Iannarone, Executive Director of The Street Trust, which advocates for transportation options that prioritize safety, accessibility and climate justice. "The protected bike lanes and pedestrian crossing beacons are long overdue on this street and other deadly streets in East Portland. The raised medians will bring order to the chaos that has killed too many neighbors and which disproportionately affects communities of color and immigrant households."

"As a high crash corridor, Division Street has seen many traffic related deaths and crashes," said Lisha Shrestha, Executive Director of the Division Midway Alliance. "With the protected bike lanes, more street lights and traffic signals, we hope people's lives can be saved. Most of our newcomer communities use the sidewalks and are transit users, therefore transit safety improvements are instrumental for our community well-being."

PBOT also used the same contractor as the TriMet project. With leadership from Raimore Construction, PBOT's safety project achieved near 90 percent use of minority, women-owned, and other disadvantaged businesses for contracting and subcontracting.

Since 2012, there have been 23 traffic deaths on SE Division Street between 80th and 174th avenues. 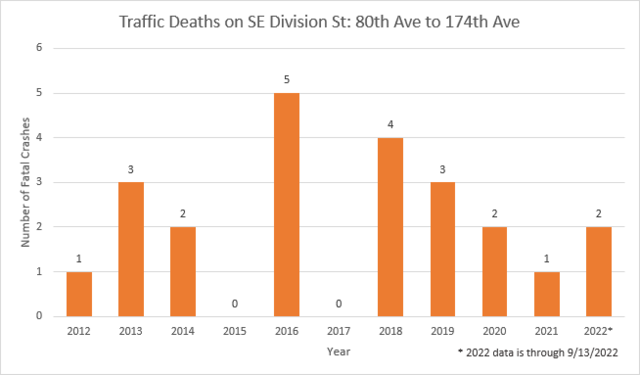 To learn more about the safety improvements PBOT has made on SE Division Street, watch this video from before construction started

Since 2009, PBOT has been working with the community on outer SE Division Street to develop projects that improve safety — especially for pedestrians — including sidewalks, safer crossings, and more street lighting.

PBOT's Outer Division Project, combined with TriMet's Division Transit Project, built nearly 81,000 square feet of new sidewalks along the corridor, including 59,000 square feet in Portland and 22,000 square feet in Gresham. Together, the project teams developed protected intersections at 122nd, 148th and 162nd avenues that provide public transit priority while creating a barrier between people and vehicles. 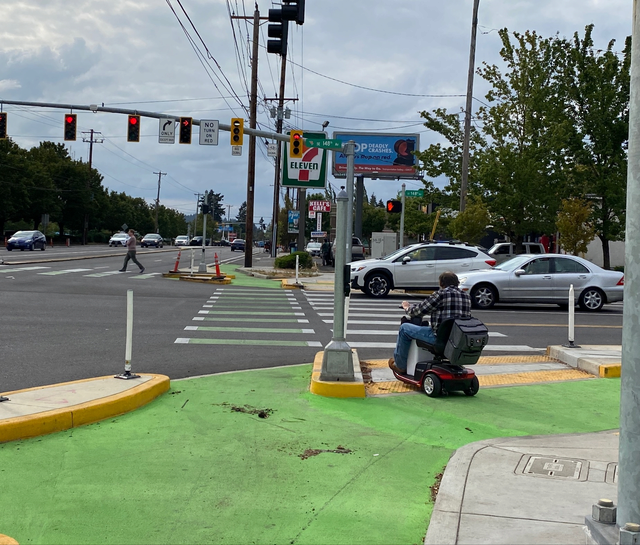 A person using a mobility device waits for the traffic signal to change while positioned between curbs that guard against vehicle traffic at a protected intersection at SE Division and 148th Avenue. This is one of several protected intersections using concrete that were developed by TriMet and PBOT as part of the Division Transit Project. Green paint marks the route for bicycle use, which is also in the protected space. Photo by PBOT.

In June, the City Council adopted a budget that included an additional $4.7 million to reconstruct the pavement along SE Division Street between César E Chávez Boulevard and 52nd Avenue. Pavement along this section of SE Division Street is among the worst along its entire length from the Willamette River to the city limits. Along with this project, PBOT will also upgrade all 51 curb ramps to meet Americans with Disabilities Act (ADA) standards. Construction is planned for summer 2023.