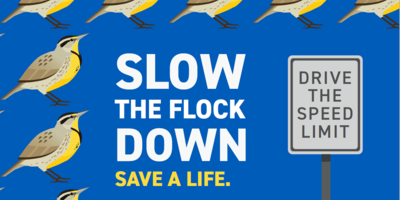 (July 11, 2022) Slow the flock down! It’s the latest message to drivers, courtesy of the Portland Bureau of Transportation (PBOT) and the Seattle Department of Transportation (SDOT) who unveiled their new campaign directed towards drivers today, in a colorful, tongue-in-cheek message designed to encourage people to slow down when driving. The campaign, developed by SDOT, reflects the partnership between the Pacific Northwest’s two largest cities. Launching the campaign concurrently will increase the message’s visibility throughout the region as the two Vision Zero cities continue to tackle their shared goal of traffic safety.

Nationally, according to the U.S. Department of Transportation’s Fatality Analysis Reporting System, speeding is involved in about 30% of all traffic deaths. In 2020, 72% of traffic deaths were males and males aged 16-29 had the highest traffic fatality rate of any demographic group. In Portland, speed is identified as a major factor in half of deadly crashes. To achieve safe speeds, Portland is redesigning streets, lowering speed limits, expanding its speed safety camera program, and educating drivers. Early evaluations of changes on NE 102nd Avenue and NE Glisan Street indicate that these efforts are working. Safe travel speeds lower the risk of crashes occurring. When crashes do occur, safe speeds make it less likely that people are killed or seriously injured.

While the message and goals of the Seattle and Portland campaigns are the same, convincing drivers to slow down for their own safety and the safety of others, there are subtle distinctions. In Portland, the message is backdropped by Oregon’s state bird, the Western Meadowlark, while in Seattle, Washington’s state bird, the American Goldfinch, is featured. Portlanders will be shown ads on social media as well as billboards along the city’s high crash corridors. PBOT will also distribute yard signs at public events this summer and make them available for pickup at The Portland Building downtown and via neighborhood coalitions across the city, visit the safety campaign's website for details at www.portland.gov/transportation/vision-zero/flock.

"I'm so proud of this partnership between Seattle and Portland. Speeding has a direct impact on the lives of all of us in the Pacific Northwest," said Transportation Commissioner Jo Ann Hardesty. "No one should lose their life on Portland’s streets. It is up to all of us to slow down and drive the speed limit."

"There is still much work to do, but we have made real progress in addressing the safety issues and updating speed limits on our high crash corridors," said Transportation Director Chris Warner. "As we continue to invest in street improvements for safety, we ask everyone to do their part by driving the speed limit and watching out for others."

"This is an important reminder for drivers to slow down so we can keep making streets safer for everyone," said Kristen Simpson, Interim Director of the Seattle Department of Transportation. "Seattle and Portland share the same goal of reaching zero traffic deaths and injuries on our streets, so it’s great that we could partner with PBOT to reaffirm our joint commitment to safety and Vision Zero."

Speed limit signs and safety campaigns are a small component of PBOT’s safety and speed reduction efforts. PBOT is redesigning Portland’s high crash corridors to slow speeds, provide protection to people walking and rolling, and increase efficiency of transit. The goal is to design streets for the safety of people, not the fast flow of traffic. These are tried and true tools that enhance safety for everyone. Some traffic safety efforts that are currently underway include:

Through the Vision Zero program, the City of Portland and our partners are working to eliminate traffic deaths and serious injuries on our streets. Learn more at www.visionzeroportland.com