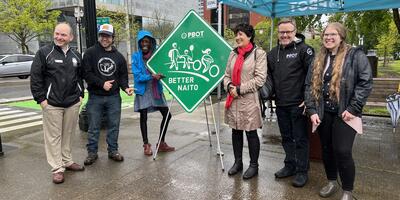 Commissioner Jo Ann Hardesty alongside city, community, and business leaders cut the ribbon this morning on the Portland Bureau of Transportation’s Better Naito Forever project, the permanent version of Better Naito, the protected space for people walking and biking to and along Waterfront Park.
Published
May 6, 2022 1:08 pm

(May 6, 2022) Commissioner Jo Ann Hardesty alongside city, community, and business leaders cut the ribbon this morning on the Portland Bureau of Transportation’s Better Naito Forever project, the permanent version of Better Naito, the protected space for people walking and biking to and along Governor Tom McCall Waterfront Park. The project, which began as a grassroots initiative led by Better Block PDX, was first piloted in 2015 and went through multiple seasonal iterations before construction began in March 2021 on Better Naito Forever.

Better Naito Forever offers benefits for all travelers. The project added over 17,000 square feet of new, accessible sidewalk to the west side of Waterfront Park and features shorter, high visibility crosswalks for crossing SW Naito Parkway. A new 1.2 mile two-way protected bikeway is marked in bright green for people on bikes and scooters, with a concrete curb to provide separation between bike and car traffic. New bike signals greet people on bikes where new steel bollards were added for additional protection. Better Naito Forever connects seamlessly with the SW Naito Improvement Project, creating a continuous bikeway from SW Harrison to NW Davis streets. The traffic signals on SW Naito Parkway have also been upgraded to detect and dynamically adjust to vehicle queues, minimizing impacts to northbound drivers. Signal upgrades and advanced vehicle detection technology were also added to help people driving to I-5 via the Morrison Bridge. The project also relocated the world’s smallest park, Mill Ends, 6-inches west from its former location to provide a new median island for people to stand on when visiting the park.

As Portland begins to emerge from the pandemic and the summer festivals return to Waterfront Park, people now have a safer and more accessible way to reach their favorite events, cherry blossoms, and important historic and cultural sites like the Japanese American Historical Plaza.

“This is what Portland is all about,” said Transportation Commissioner Jo Ann Hardesty. “We want to open up our streets, our communities and our hearts to everyone. Because we know we are better when we do. Today is a celebration of what our community can accomplish when we come together.”

“One of the great things about the Better Naito evolution was how much we were able to learn over the years from the feedback we received from our various project partners and incorporate that learning into our final design,” said Transportation Director Chris Warner. “This new space is a beautiful complement to Waterfront Park and makes traveling to, from, and around the park a much safer and more pleasant experience.”

The Better Naito project was first piloted in 2015 to help manage the thousands of visitors coming to Waterfront Park, create a safe space for people to travel to these events, and to reduce conflicts between people walking, biking, and driving alongside the park in the summer months. Prior to the pandemic, the festivals in Waterfront Park would draw hundreds of thousands of people each year. During the peak season between April and November an additional 15,000 more people per day visit the waterfront.

The first iteration of Better Naito was a two-week pilot project developed by Better Block PDX, students from Portland State University, and a host of community partners, including the Portland Rose Festival. Prior to Better Naito, people were often forced to walk in the bike lane, squeeze into narrow dirt paths, or bike in a travel lane with motor vehicles to reach waterfront events. The volunteer-led effort championed by the non-profit Better Block PDX improved the Waterfront Park experience during its busiest season and was implemented again in the summer of 2016 for an extended period in partnership with multiple Waterfront Park events including Cinco De Mayo, Rose Festival, Waterfront Blues Festival, Pride NW, Brewers’ Fest, and Portland Saturday Market.